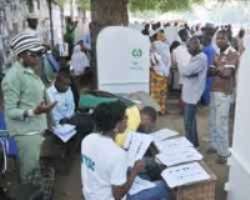 SECURITY operatives yesterday aborted a planned protest by the Rivers State chapter of the Action Congress of Nigeria (ACN) and invited its National Treasurer, Kenneth Kobani, for questioning.

Aggrieved members of the party had gone to the office of the Independent National Electoral Commission (INEC) to protest over the results of last Saturday's National Assembly election results, which the party said were fraught with irregularities.

However, the Peoples Democratic Party (PDP), which won all the 13 House of Representatives and three senatorial seats, has described the election as free and fair.

The party alleged that the State Security Service (SSS) also had invited Kobani and the state ACN Chairman, Uche Okwukwu, to Port Harcourt for interrogation over the protest.

Director of Publicity and Communications, Abiye Sekibo Campaign Organisation, Jerry Needam has condemned the action of the security operatives.

Hundreds of ACN supporters also yesterday matched to the campaign office of the All Progressive Grand Alliance (APGA) governorship candidate in Rivers, Celestine Omehia, urging the party to join in the call for cancellation of the elections.

Their spokesman, who identified himself as the National Assembly candidate of Khana Local Council, Bariledum Famaa, called for the removal of the State's Resident Electoral Commissioner (REC), Aniedi Ikoiwak, and demanded that ACN candidates be declared winners of the election.

At a media conference yesterday, APGA claimed that in Ward 1 of Abua/Odua Local Council, voters were intimidated by the Divisional Police Officer (DPO) in-charge of the area, Uche Mike Chukwuma, which disrupted the voting process.

In a five-page petition by the Rivers State Chairman, Terry Godfrey and Secretary, Precious Barido, APGA also alleged that some of the party's candidates and agents were beaten and detained by the police.

Also, citing alleged massive irregularities in the polls, the Congress for Progressive Change (CPC) gubernatorial candidate in Gombe State, Abubakar Aliyu, has disclosed that he would challenge the election of Governor Danjuma Goje as senator to represent Gombe Central Senatorial District at the election tribunal.

Aliyu, who spoke yesterday in Gombe, claimed that vote-buying and outright rigging characterized the election, which skewed the results in favour of Goje.

He also alleged that some INEC workers were currently conniving with top government officials in the state and asked the commission's National Chairman, Prof. Attahiru Jega, to check this immediately to avoid loss of credibility by INEC.

In Oyo State, former Governor Lam Adesina yesterday declared that the ACN in the state would go before the election petition tribunal to contest the results of Oyo North Senatorial District and three other constituencies won by the PDP.

Adesina, who disclosed this at a media briefing where he reviewed the performance of the ACN in last Saturday's National Assembly election, questioned the victory of the PDP in Oyo North, which comprises three local councils in Ogbomoso and 10 in Oke-Ogun, saying the results declared did not reflect the true wishes of the citizenry.

The former governor who was flanked by the party's governorship candidate, Senator Abiola Ajimobi and its Senator-elect, Chief Femi Lanlehin as well as other top chieftains of the party at the zonal office of the party also frowned at the results declared in Oluyole, Irepo-Orelope-Olorunsogo, Saki East-West and Atisbo federal constituencies by the INEC.

Meanwhile, the Oyo Central Senatorial Candidate of the Accord Party, Bisi Ilaka, has protested the victory of his ACN counterpart, Ayoade Adeseun, in the National Assembly polls.

He also announced plans to challenge the result at the tribunal and expressed confidence that he would get justice from the judiciary.

Ilaka alleged that the election which produced Adeseun as the winner for the zone was characterised by massive electoral fraud.

He specifically queried the results declared in Oyo West and Atiba, saying the figures were inflated to suit the ACN candidate.

In a related development, the ACN in Ondo State is set to challenge the victory of the Labour Party (LP) candidates in Ilaje/Ese-Odo and Owo/Ose Federal Constituencies in last Saturday's National Assembly polls at the election petition tribunal.

The INEC returned Raphael Nomiye and EniOlorunda Omosule of the LP as winners in the two constituencies while Felix Rawa and Olufemi Adekanbi of the ACN lost out in the contest.

But the ACN, which expressed optimism at getting justice at the tribunal, cried foul yesterday, claiming that the process through which the two candidates lost was manipulated by both the state government and the electoral commission.

State chairman of the party, Mrs. Jumoke Anifowose, who disclosed this yesterday after a post-election appraisal meeting with all the party's candidates condemned what she called 'massive deployment of state resources by the state government for partisan purposes in favour of the ruling party.'

According to Anifowose, 'apart from the huge amount of money that could have been spent on bringing development to the state, which was used to induce the electorate, we saw several cases of intimidation and illegal conspiracy by the ruling party and the electoral commission to deny the people their rights to vote.'

And, the coalition of opposition political parties in Ebonyi State has called for the outright cancellation of the April 9, 2011 National Assembly election in the state, citing gross irregularities, including alleged diversion of polling materials by the PDP to private homes, use of military and police personnel to intimidate and browbeat voters.

At a joint media briefing in Abakaliki yesterday, chairmen and candidates of Accord Party (AP); ACN; All Nigeria Peoples Party (ANPP); APGA and the People for Democratic Change (PDC), said the worst aspect of the 'travesty' was the use of state government employees as collation and returning officers.

Reading from a prepared text, governorship candidate of APGA, Franklin Ogbuewu, said the polls 'was a brazen show of shame in Ebonyi State undertaken by impunity to return the ruling party to power.'

Ogbuewu added:  'After a painstaking review of the said election, we, the political parties that took part in the National Assembly elections on April 9, 2011 hereby strongly condemn the wide and unprecedented massive irregularities and malpractices that characterised the election in the state and accordingly reject the result of the election as declared by the INEC.'