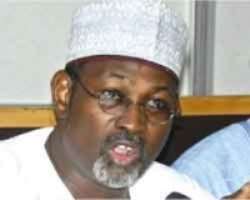 The commission, according to its Chairman, Prof. Attahiru Jega, would use today's meeting to take stock with a view to plugging all loopholes identified during the Saturday's elections.

A similar meeting, he said, would be held with the leadership of the 63 registered political parties, organised civil society groups and security operatives before the Presidential Polls on Saturday.

Jega spoke yesterday in Abuja while receiving the United States (U.S.) Under Secretary for African Affairs, Ambassador Johnny Carlson in his office.

He commended Nigerians for their resilience and patience in bringing about the success recorded of the National Assembly Elections.

But Ambassador Carlson charged INEC to build up on the success of the National Assembly polls, which he described a 'positive step' towards real democratisation in Nigeria.

Similar sentiments were expressed by the Commonwealth Observation Group as well as the National Democratic Institute (NDI), which monitored the elections.

Meanwhile, no fewer than 117 ballot boxes were stolen across the country during the National Assembly elections, Chief Press Secretary to the INEC Chairman, Kayode Idowu, has disclosed.

He said the Commission was leaving no stone unturned to fish out the perpetrators of the theft of its materials, no matter how highly placed, adding that no INEC official would be spared if found to have connived with politicians to sabotage the electoral process.

However, Idowu, who spoke in Abuja, assured that the commission would be better prepared to foil such malpractices in subsequent polls, starting with the presidential election on Saturday.

He also disclosed that the Commission had not received any complaint from aggrieved politicians who lost out in last Saturday's election against any of its officials or the results declared.

Idowu said: 'The European Union, The Commonwealth, The United States government have all spoken well about the process and were satisfied that for the first time, credibility had been added to our election. Also our Chairman has promised that there would be improvement in the conduct of the next election.'

Meanwhile, INEC has ordered a rerun in Anambra Central Senatorial District following an inconclusive election there on Saturday.

The newly-appointed Returning Officer for the election, Prof. Charles Ezimone, announced the rerun yesterday in Awka.

Okechukwu named Enugu-Ukwu ward 1, Nimo wards 1 and 2 in Njikoka Local Council, Umunachi in Dunukofia Local Council, Obosi, Nkpor and Umuoji in Idemili North Local Council as some of the places where the election was inconclusive.

He added that the total number of registered voters in the areas was 19,090, saying the votes were voided and therefore the election would have to be re-contested in the areas to determine a winner.

Okechukwu announced that the leading candidate, according to the result already obtained was Prof. Dora Akunyili of All Progressives Grand Alliance (APGA) who scored 66,263 votes.

The Action Congress of Nigeria (ACN) candidate in the election, Dr. Chris Ngige, got 65, 576 votes, while Senator Annie Okonkwo of Accord Party polled 19,999 votes.

Meanwhile, the results from Idemili North and South Federal Constituencies released by the Returning Officer for the election, Mr. Theophilus Okegbe declared Mr. Charles Odedo of the ACN as the winner haven polled 26,039 votes to beat other contestants.

The News Agency of Nigeria (NAN) reports that Prince Edozie of APGA came second with 13, 631 votes while Mr. Anthony Ibezie of Accord got 8,790 votes to place third.

Alluding to the botched April 2nd election, Jega said he was aware that the decision to postpone the polls then disappointed many Nigerians and foreign friends of the country.

However, he said he was happy that the outcome of the action was later applauded by virtually everybody.

He also conceded that there was room for improvement to bring about far better election in the country.

His words: 'Obviously, there have been quite a number of challenges which we have noted and which we are also taking adequate steps to rectify so that the next election would be much better than the one we just had on Saturday.

'For that reason, we have scheduled a meeting with all the RECs from the 36 states, where we will do a post-mortem analysis as in connection with logistics.

'We feel quite prepared for the election on Saturday. We are engaging the stakeholders, especially the political parties, CSOs in order to intensify the campaign to deal with those challenges associated with particularly security, crowd control as well as the need for orderliness of the process.'

Jega added: 'By the last elections, Nigerians have made it clear that they want free, fair and credible elections and they have very high hopes that this commission will deliver it. We are doing everything possible to satisfy this legitimate yearning of Nigerians.

'In that direction, we will keep on improving as time goes on to ensure that all other reform efforts that are required to make INEC efficient as an election management body are implemented subsequently.'