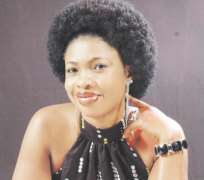 Vivian Ejike Leaving the banking industry for the make-believe world could be described as taking a journey from the known to the unknown. But Vivian Ejike's flair for glitz and glamour was what made the University of Port Harcourt graduate quit a thriving career as the head of private banking in one of the nation's leading financial institutions, a couple of years ago. And today, the success of Vivian's box office hits like Fragile Pains, Blind Obsession, The Mistress, When Heart Lies, Silent Scandal and Private Storm, have ranked the mother of one in the league of Nigeria's famous movie producers.

Talking about her phenomenal rise and rise in Nollywood, she says “During my secondary school days, I used to stand before the mirror and act like Liz Benson and lots of other actresses. When I took that decision of leaving my banking job, it was the adventurous spirit in me that took over, and the fact that I am a goal-getter. However, before I went into Banking, I had actually shot Golden Farce, my first movie, as an undergraduate in 1996. I was the youngest producer at that time.”

How did she find her way back from banking into the career of her dreams? Ejike says, “When I chose my career path, my father was a bit skeptical about it, because he thought I was going to end up being a lawyer, medical doctor or something related. Between 1999 and 2002, I was a top player in the banking industry, but my heart was still with Nollywood. I was in the banking world, but my spirit was with the movie industry. I woke up one day and resigned. Many people thought I was taking a wrong decision but I was doing very well, and stood my ground. To God's glory, I have made a huge impact in Nollywood. For over a decade now, I have produced and premiered most of my movies within and outside Nigeria,” Ejike says.

With Vivian's striking beauty and nice frame, it is not an overstatement that she is a perfect face for the camera. “I hear that on a daily basis whenever I am shooting, most of the directors I have worked with always want to push me in front of the camera rather than behind. I am very fine as a producer and very okay doing what I do by getting fantastic stories, getting the artistes to put in their best and putting everything together and getting the best out of it,” she enthuses. While accolades keep trailing Vivian's latest movie, Private Storm, it is no doubt that there are still aces up the sleeves of the gifted scriptwriter cum producer.