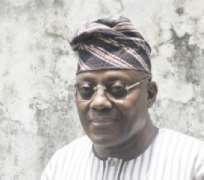 LAGOS, April 09, (THEWILL) – Lagosians turned out in sizeable numbers to vote for candidates at today’s elections just as the Independent National Electoral Commission (INEC) did not include the Labour Party (LP) in today’s National Assembly election thus leaving candidates of the party in the cold. The commission has not issued a statement on how it intends to resolve the very embarrassing situation.

However, THEWILL checks on INEC's website showed that INEC did not include LP candidates in all the constituencies in the NASS elections in the state.

Dapo was formerly of the Action Congress of Nigeria (ACN) but was one of those that left the party because of the overbearing influence of Bola Tinubu. He is backed by the influential Lagos Rescue team, a group of aggrieved former ACN members.

During the conduct of today’s election, THEWILL observed that quite a large number of persons statewide that were accredited to vote in last week’s botched election were unable to do so today as their names were missing from the register.

Meanwhile, THEWILL has gathered that Chief Lanre Razak of the Action Congress of Nigeria (ACN), who recently dumped the People’s Democratic Party (PDP) alongside Demola Seriki and others, was shot by yet to be identified gunmen but is said to have survived.