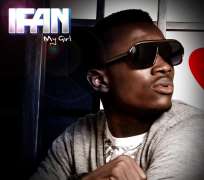 Ifan born Ifeanyi Michael has collaborated with Storm Record artiste General Pype for his debut single titled My Girl. The sure hit record is produced by Phat E.

Ifan whose government name is Ifeanyi Michael is an indigene of Anambra state but he was born in Port Harcourt. He is an RnB pop singer, songwriter, instrumentalist who started out as an actor while he was young.

As an actor, he has featured in movies alongside renowned acts like Nonso Diobi, Patience Ozorkwo (popularly referred to as Mama G), Comic act John Okafor best known as Mr Ibu, just to mention a few. The artist is making as much mark as a singer as he has worked with artistes like Mo'Cheeda, Kefee, Vector, Rooftop MCs, Mike Anyasodo, Kel and several other up coming artistes.

Ifan was in the news weeks after 'My girl' was released over a misquote by a journalist over the similarity in the chordal progression of the record with Ice Prince's Oleku. Ifan had met Jesse Jagz and Ice Prince before 'Oleku' was recorded, playing his record which was newly recorded at their meet - before hit song 'Oleku' from Ice Prince was made, stating this to a journalist and expressing his surprise and excitement in the similarity in the chordal progression of his record 'my girl' with Ice Prince's Oleku, he was misquoted as saying Ice Prince stole his 'progression'. The artiste swiftly addressed the report, shooting down the alleged claim.

The debut single 'My girl' is a mid tempo love record which an impressive synergy between the two artistes on the record - Ifan and Gen. Pype.