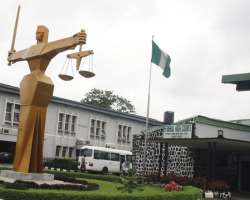 ABEOKUTA, April 07, (THEWILL) - Ogun State chapter of the Peoples Democratic (PDP) today lost a suit filed against the Peoples Party of Nigeria (PPN) and its candidates at a Federal High Court in Abeokuta.

The PDP had asked the court to disqualify candidates of PPN from the general election.

Presiding judge, Justice Rita Offili-Ajumojobia while delivering her judgement held that since no injury whatsoever could be inflicted on the plaintiffs (PDP) in the event that the candidates of the 2nd Defendant (PPN) are allowed to contest the forthcoming general election, and that since there is no proof of any breach of law against them, the PDP had no case.

Justice Rita Offili-Ajumojobia further added that the PDP does not have locus standi to seek the disqualification of PPN as the PDP has no right to delve into the matter.

She thereafter dismissed the suit for lack of locus standi.

“Federal High Court in Abeokuta this morning ruled that the Peoples Democratic Party (PDP) has no locus standi to have come before it (the court) to seek disqualification of the candidates of Peoples Party of Nigeria (PPN) in Ogun State and as such the case was dismissed,” a statement from the court said.

THEWILL recalls that the Ogun State chapter of PDP had approached the Federal High Court, Abuja on 22nd day of March 2011, in SUIT NO: FHC/ABJ/CS/377/11 between Bashorun Dayo Soremi, Chief Tunde Fadun, Mr. Wale Solaja on behalf of Ogun PDP candidates for the general election (Plaintiffs) and the Independent National Electoral Commission (INEC) (1st Defendant); and the state chapter of the Peoples Party of Nigeria (PPN) (2nd Defendant).

The Plaintiffs sued for themselves and on behalf of Ogun State Peoples Democratic Party (PDP) candidates for General Elections 2011. The case was later transferred to the Abeokuta division of the Federal High Court and came up for hearing on Tuesday 5th April, 2011.

A written address in support of the motion on notice was supported by a five-paragraph counter affidavit deposed to on behalf of the 2nd Defendant (Peoples Party of Nigeria) by Mr. Wale Junaid, Director of Research in the party.

However, one of the counsels representing the 2nd Defendant (PPN); Mr. Tayo Oyetibo SAN, urged the honourable court to dismiss the suit on the following grounds:

“The Plaintiffs lack the locus standi to institute and maintain this suit as presently constituted; The Plaintiffs have no common interest in the subject matter of this suit and the reliefs sought therein; The instant action is not properly constituted; The non-joinder of the persons listed in the schedule to the Statement of Claim renders this action incompetently constituted having regards to the reliefs sought and the averments in the Statement of Claim; In the premise, this Honorable Court lacks the jurisdiction to entertain this suit.”

In his reaction to the ruling, the lead counsel of Ogun PDP, Mr. Ajibola Oluyede described the ruling as unsatisfactory, saying he would advise his client to file an appeal in order to establish the right of the citizen to ensure that public institutions comply with the law.

He maintained that the ruling means that no one can enforce Section 32-37 of the Electoral Act except PPN that has breached it, saying that “in our case we believe we have the right to complain because these people PPN is fielding are people that had ongoing battle with, within the PDP, so in that sense we believe we have a stronger position than just an average citizen.”

He added that democracy as well as the nation would suffer from the action of PPN, noting that the move was to divide the vote of PDP.

In the court were counsels for the plaintiffs; Mr. Oluyede R.A and Mr. Sotayo. While the 2nd Defendant was represented by Mr. Kemi Pinheiro SAN, Mr. Gbenga Ojekunle, Mr. Deji Enisehin, as well as junior counsels.

In another development, the court in another case instituted by the PPN, restrained INEC from altering, tampering or rejecting the nomination list of PPN. The case was filed on behalf of PPN by Mr. Festus Keyamo.