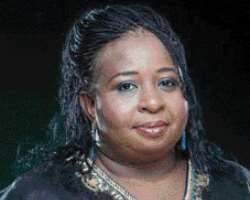 •Anyiam-Osigwe
Head-honcho of the African Movie Academy Awards (AMAA), Peace Anyiam-Osigwe recently described President Goodluck Jonathan as the first Nigerian leader to take special interest in the developmentr of the arts and entertainment sectors of the Nigerian economy.

She disclosed at the just-concluded AMAA, which held in Yenagoa, the capital of Bayelsa State, where she also declared her support for the President's victory at the poll before an international audience that include film makers, celebrities from Nigeria and other parts of the world.

In what had been described as a suprise move by many watchers and guests, she veered off her prepared speech to inform the capacity full hall at the Gloryland Cultural Centre that President Jonathan's interest for the culture, entertainment and art sectors transcends his support for AMAA when he was the governor of Bayelsa State. Adding that the recent initiative of the Federal Government to provide $200 million loan for practioners in the entertainment industry underscores the President's belief in promoting the sector as a major non-oil revenue earner for the country.

Osigwe, however called on the Federal Government to continue to strengthen institutions that will support the industry to grow and empower more Nigerians who are operating in the industry.

''We want our President on re-election to help put in place necessary infractrusture and strengthen existing ones for our industry to grow. We want piracy wiped out so that we can make money from our talents and creativity. We want the right people to head the government agencies that are supposed to work for the industry. We want enabling laws that will protect the industry and make it attractive to investors and corporate Nigeria to support. We want to be taken seriously and for once we have a President, who is looking in our direction we must seize this moment with our hands and support Jonathan in the coming election…'