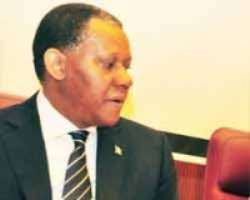 FOREIGN Affairs Minister Odein Ajumogobia yesterday affirmed that the 'era of arm chair diplomacy is over' and charged the nation's 25 newly appointed ambassadors to up the ante in Nigeria's renewed economic diplomacy drive.

At the start of a two-day induction for the diplomats, the minister noted that the people revolt currently rocking the Arab world was a lesson for Nigerian diplomats who must now know 'what Nigerian competitors in other countries are doing.'

Disruptive citizens' demonstrations and people's revolt have been traced by development experts to youth unemployment, lost opportunities and insensitive governance

Noting that Nigeria was in dire of job creation to reduce youth employment, the minister said: 'The current events in North Africa and the Middle East should convey a message to us in this region; that youth unemployment or social-economic performance constitutes a lethal brew for insecurity…the urgent need to reduce youth unemployment will be determined by what you do as ambassadors in your posts in the years ahead…Ultimately the peace, security, stability and prosperity of our great country will, to a large extent, depend on how much we in the Foreign Ministry, and you as ambassadors outside Nigeria do.'

Stressing the need to aggressively engage in economic diplomacy at the outposts, the minister told a listening audience: 'In the world of today, politics, trade, investments and development are key issues for Nigerian missions in a world of unprecedented technological and economic change. There is

need to understand that unlike political maps where boundaries between countries are clear, economic and business maps are borderless and have virtually disappeared…We now live in a wired world. Nigerian missions are the windows of opportunity in their different host countries… the Nigerian head of mission must therefore develop insights into how Nigeria and Nigerian companies can compete and win in the global market place.'

The tone of yesterday's charge was set earlier by the permanent secretary of the Ministry of Foreign Affairs ambassador Martin Uhomoibhi who had noted that 'Nigeria is on a threshold of a new dispensation. So much is expected of you now. Nigeria is not competing with any country in Africa. Your nation has given every country on the continent from the little that we have been endowed with, even the lives of our citizens…'

The envoys who were selected by the previous administration of Umaru Musa Yar'Adua but whose posting had to be delayed for administrative reasons include Ambassadors Okubotin Charles Cocodia, Bulus Lolo, Vincent Okoedion, Humphrey Orjiako, J.C. Ezema, Ayo Olukanni and Tuesday Kayode Obajuluwa.

They will be designated countries soon after the induction which ends today.

Meanwhile, Vice Chairman, Senate Committee on the Federal Capital Territory (FCT), Anthony Agbo, has said that the revolts sweeping across the Mahgreb region and the Middle East were not normal revolutions, stressing that the development raises new fears about the security of Israel and world peace.

Senator Agbo explained the upheavals as 'the climax of deep-seated sentiments against the United States (U.S.) foreign policy, which before now placed emphasis on planting and perpetuating stooges in the region' instead of pursuing a policy of friendship with Arab citizens.

In a chat with The Guardian, he noted that the policy of using governments of Arab countries to hold the citizens under control to support the state of Israel has become obsolete and should, therefore, give way to showing a new face aimed at endearing it to the citizens of these Arab nations.

Agbo also said the escalation of crisis in the Arab world presents serious security and humanitarian challenges to Africa and the Middle East, enjoining the Nigeria Emergency Management Agency (NEMA) to study the situation closely and plan ahead for contingencies.

The senator noted that apart from environmental hazards and possible refugee incursion, the possibility of spiralling effects was high, stressing that the movement of large numbers of people from North Africa towards Nigeria should be expected in addition to the dislocation of Nigerian citizens from those countries.

He said the upheavals in the Arab world and recent United Nations resolution 1973 against Libya could compound the deep-seated negative sentiments against the U.S. foreign policy.

Expressing concerns about Nigeria's elections, vis-Ã -vis the events in the Maghreb region, the senator said a new wave of citizen power was sweeping across the world such that unpopular policies and programmes could draw the wrath of the people and make them to rise up and depose their governments.

Warning that such upheavals should not be treated as impossibility in Nigeria, he said: 'I see what is happening in the Arab world as beyond a normal revolution; I see it as a kind of revolt against unpopular regimes and American foreign policy in the region. Because of this, I have very big concerns about the future security of Africa and the Israeli state. And my panacea for ensuring and guaranteeing that security is for both Israel and the U.S. to start making friends with Arab citizens. The policy of high handed show of power should be put aside'.

Agbo, who represents Ebonyi-North Senatorial District, declared that unless the U.S. changes its policies in the Arab world, the only country that would continue to benefit from the serial upheavals is Iran.

He added that such high-handed policies end up projecting Iran as a strong and truly independent nation, thereby drawing the positive sentiments and admiration of Arab citizens especially the youth, to Tehran.

Agbo, who is a former Speaker of Enugu House of Assembly, maintained that high-handed show of force or disregard for citizens' voice would no longer continue to go far in holding people down.