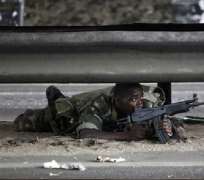 Ivory Coast's Laurent Gbagbo was negotiating the terms of his departure from power on Tuesday following a fierce assault by forces loyal to his presidential rival backed by U.N. and French helicopter airstrikes.

France said it expected a swift exit by Gbagbo, who had clung to power since refusing to concede he lost last November's presidential election to Alassane Ouattara, plunging the world's top cocoa-growing nation into renewed civil war.

"We are on the brink of convincing him to leave power," French Foreign Minister Alain Juppe told parliament in Paris.

"If everything goes well, we will have a declaration soon," Ahoua Don Mello told Reuters.

Gbagbo was said to be in Abidjan, with some media reports saying he was in a bunker below his residence.

Gbagbo's forces called for a ceasefire after being comprehensively outgunned in the end, and French Defence Minister Gerard Longuet said the West African country's crisis could soon be over.

"We are in a situation where everything could be resolved in the next few hours," Longuet told a news conference.

U.S. President Barack Obama called on Gbagbo to stand down immediately and order his fighters to lay down their arms.

The United Nations mission in the country said Gbagbo's army chiefs had asked their men surrender their arms to U.N. forces and seek protection.

Over the past week, forces loyal to Ouattara had launched a major assault on Gbagbo's last strongholds in Abidjan, driving home their campaign to oust him.

A Reuters eyewitness said on Tuesday that calm had returned to the area surrounding the presidential palace after days of fierce machinegun and heavy weapons fire.

The U.N. peacekeeping force in Ivory Coast, supported by the French military, had targeted Gbagbo's heavy weapons capabilities on Monday with attack helicopters after civilians were killed in shelling.

"It looks like Gbagbo is trying to negotiate his way out. What he can offer is another matter ... his negotiating position is much weaker than a couple of weeks ago," said Hannah Koep, Ivory Coast analyst at London-based consultancy Control Risks.

The conflict pushed cocoa prices lower on Tuesday as dealers bet on a swift end to Gbagbo's rule and a resumption of exports. The country's defaulted $2.3 billion Eurobond rose as the assault raised expectations for repayment.

FINAL ASSAULT
In the north of Abidjan, bullet-riddled bodies lay by the side of the main motorway near the largely pro-Gbagbo neighbourhood of Yopougon, evidence of recent fighting between Ouattara and Gbagbo forces, a Reuters witness said.

An armoured personnel carrier was pushed across the roadway, still in flames, and residents who had emerged from their houses to find water said they had heard machinegun and heavy weapons fire through the night.

The United Nations human rights office in Geneva on Tuesday expressed concern over the killings of dozens of civilians in Abidjan, amid reports of heavy weapons used in populated areas.

Gbagbo has defied international pressure to give up the presidency after an election last November that U.N.-certified results showed Ouattara won, rejecting the results as fraudulent and accusing the United Nations of bias.

More than 1,500 people are reported to have died in the standoff that has rekindled the country's 2002-3 civil war, though the real toll is likely much higher.

Several thousand pro-Ouattara fighters had entered Abidjan from the north on Monday in a convoy of transporters, pick-ups mounted with machineguns, and 4x4s loaded with fighters bearing AK-47s and rocket launchers -- in a "final assault".