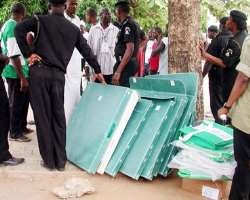 ABUJA - THE Independent National Electoral Commission, INEC, yesterday, launched a stock taking mechanism to ensure that materials already used in some parts of the country before the postponement of last Saturday's elections were not used in subsequent elections.

Vanguard gathered that this was to ensure that 'voting materials already used last weekend before the postponement would not find their way back into the system on Saturday when the fresh round of elections hold'.

An INEC commissioner told Vanguard: 'INEC is determined to ensure that any form of rigging is nipped in the bud as much as possible so that is why we are putting these mechanisms in place.

Retrieval of materials
'In as much as the places where actual voting commenced is of insignificance when interfaced with the larger Nigerian nation, we are still interested in and committed to ensuring that at the end of the day, none of the few already used materials make their way back into the system and all electoral officers are being made to account for all the materials that they were given and which they signed for.'

In a related development, the commission has commenced moves to penalize some of its vendors whose failure to supply electoral materials resulted in the postponement of elections into the National Assembly.

Vanguard was reliably informed that this was part of the fallout of last Saturday's National Security Council, NSC, meeting between INEC Chairman, Professor Attahiru Jega and members of the NSC which includes but is not limited to President Jonathan and the National Security Adviser, NSA, General Azazi.

The process of penalizing the vendors was disclosed by the Chief Press Secretary to the Chairman of the Commission, Mr. Kayode Idowu, in an interview with several journalists at the Abuja INEC headquarters.

He said the commission was adhering to the terms of the contractual agreements between it and the vendors which stipulates that INEC should not engage in a media trial before meting out the appropriate penalty to the vendor involved adding that it was for this reason that the commission's boss refrained from mentioning the name of the actual vendor.

Idowu said: 'Engaging in a media trial is not one of the terms of the contract and will not help the process of penalising anyone who has breached the agreement.'

He dismissed fears expressed in some quarters that electoral materials which may have been smuggled out of various polling units across the country could be used for cheating when the re_scheduled election holds next Saturday, stressing: 'The voting which took place in some parts of the country before the entire poll was postponed could be described as inconclusive since electoral officials who conducted these exercises did not have result sheets in which to record the outcome of such polls.

Recording of results
'Perhaps the intention of such electoral officers was to record the results of the election they conducted in ordinary sheets of paper which was exactly the sham process the Commission wanted to avoid. So, the commission said no.'

Idowu stated that an election did not entail just counting the ballot papers cast adding that there were series of processes involved. He noted that the late arrival of electoral personnel at some of the voting centres across the country was due to the fact that many of them were waiting for the arrival of the electoral materials.

A source told Vanguard: 'Those materials that came in last night had been cleared and taken away this morning,' adding that other cargo airlines were involved in the airlifting of the election materials into the country.

The Skyway Aviation Handling Company, SAHCOL, official who spoke with Vanguard on condition of anonymity said they were not involved in any handling of  INEC materials in the last two days.

He noted: 'We have been involved in  handling of INEC materials, but in the last two days we have not handled any of such materials. Except the other handling company did that, but not Sahcol.'

There are indications that more election materials are still coming into the country, according to airport sources.

INEC Chairman, Atahiru Jega, during the cancelled elections on Saturday had blamed the distribution of relief materials to Libya and Japan by Boeing which had been contracted by their vendors for the delay in the arrivals of the materials.

Jega said then that government had stationed Airforce aircraft on ground for the distribution of the materials as soon as they arrive Nigeria through the various airports.