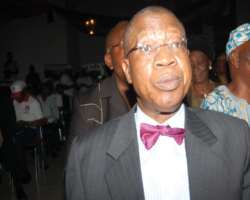 UYO, April 01, (THEWILL) – The Action Congress of Nigeria (ACN) has described as barbaric and strongly condemnable the manhandling of its governorship candidate in Akwa Ibom, Sen. J.J. Akpanudoedehen, by security agents who re-arrested and slapped him, after he was granted bail in the phantom treason charge against him.

In a statement issued in Ilorin, Kwara state, on Friday by its National Publicity Secretary, Alhaji Lai Mohammed, the party said it is particularly appalled at the lawlessness and sheer brigandage of the police officers, who stormed the court with their weapons drawn and virtually dragged out a man who is presumed innocent until proven otherwise.

It said the action of the police amounted to a grave desecration of the hallowed chambers of the Court, a mockery of justice and a sad reminder that Nigeria, though in a democratic dispensation now, can easily slip back to the dark days of military dictatorship.

ACN said it is ironic that such an act of violence in the deep recesses of a court, a few days before key elections, occurred under the watch of a President who has continuously told the world that he is committed to a free, fair and violence-free election.

''Nothing shows the partisanship and lawlessness of the police under IGP Hafiz Ringim more than the Gestapo-like action of the officers in not only re-arresting our gubernatorial candidate, even when the Judge has condemned the lack of evidence to back the grave charges slammed on him, but also slapping him.

''We demand that the police officer or officers involved in this show of shame be identified and punished, while the IGP himself must be sacked immediately, unless of course he is acting in the interest of President Goodluck Jonathan.

''But whether or not Ringim is sacked, we will like to remind him of what happened to one of his predecessors in the not-too-distant past, who was dumped after being used by the powers that be to thwart the people's will in another general election. This IGP too will get his comeuppance at the appropriate time,'' the party said.

ACN said it is now clear to all Nigerians that the party was not just crying wolf when it said IGP Ringim is colluding with the PDP and the Government of Akwa Ibom to put away Senator Akpanudoedehe, so that Gov. Godswill Akpabio can have an easy ride in the April 16th gubernatorial election.

ACN Akwa Ibom Warns: “Failure to release Senator Udoedehe immediately is likely to set off reactions which can truncate democracy in the country.”

In a statement by its Chairman, Chief Aniekan Willie Akpan said, “On Thursday, March 31, 2011, A Federal High Court in Abuja, presided over by Hon. Justice Bello in his wisdom, granted the Action Congress of Nigeria (ACN), Governorship Candidate in Akwa Ibom State, Senator John James Akpanudoedehe bail in the trumped up charges of treasonable felony against him.

“This news of the ruling by the learned Judge elicited joy and calmed the frayed nerves of the teeming supporters of the popular Candidate in Akwa Ibom State.

“However, in a very primitive and brazen show of might, Senator Udoedehe was re-arrested in the Court room by the Police and taken to an unknown destination. As a party, we condemn this open display of partisanship by the Federal Government and its agent, the Police.

“We have it on good an authority that the Akwa Ibom State Governor, Chief Godswill Akpabio, has conspired with the Speaker and Members of the State House of Assembly to pass an emergency obnoxious bill designed to detain our Candidate indefinitely aimed at stopping him from contesting the forth-coming general elections. This is against all known and acceptable democratic principles.

“The action of Governor Akpabio, in collusion with the Nigerian Police which is reputed as the most corrupt Institution in the world is totally unacceptable. It is sad that the Nigeria Police Force has sold its soul to the Governor of Akwa Ibom State, Chief Godswill Akpabio.

“This is because, rather than act fairly and truthfully in the political crisis in Akwa Ibom State, the Police has chosen to favour Governor Akpabio who spares no amount of money in buying his way on any matter in Nigeria.

“It is on record that the Police has received several reports and representations concerning how the Godswill Akpabio led government in Akwa Ibom State has mobilized cultists, organised them into groups, armed them with sophisticated weapons which they have used to foist a regime of insecurity in Akwa Ibom State but they chose to turn a blind eye to Governor Akpabio and his aide’s security breaches.

“This latest provocation, the re-arrest of Distinguished Senator Udoedehe and the plan to put him away, may prove to be very costly for democracy and Nigeria and we urge President Goodluck Jonathan to stand up for the rule of law to which he subscribes.

“It must be noted that failure to release Senator Udoedehe immediately is likely to set off reactions which can truncate democracy in the country,” the Chairman stated.