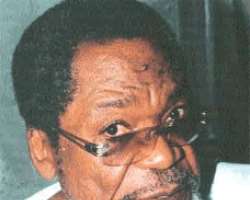 Braithwaite
Second Republic politician, activist, legal practitioner and former presidential candidate, Mr. Tunji Braithwaite, has said that his dearest desire is to see the ruling party, Peoples Democratic Party (PDP) ousted from power by losing in the elections. Braithwaite, who in the hey-days of the military rule suffered several intimidations and arrests as consequence of his activism and defence of renowned Afro-beat king Fela Anikulapo-Kuti also expressed doubts about the elections.

How do you see the candidacy of President Goodluck Jonathan?

I have no reaction against it or for it. That is an internal matter of their party.

Are you prepared to form a coalition against the PDP?

Well, that is if this election holds. I have my doubts about the election holding. But if it holds I believe it would be a good thing for this country if an evil party like the PDP is ousted from power.

Why the doubts about the possibility of the lection holding?

Oh yes, it is because everything points to chaos. There are certain preliminaries and fundamental national issues that are not attended to. And until such issues are addressed, issues like wholesale corruption and voter apathy need to be addressed. Even if the elections hold at all, they would be inconclusive and would lead to chaos and this time round chaos would not be good for the peace and progress of this country.

Can you expatiate on what you mean by wholesale corruption?

Haven't you seen much corruption in this country? Do you have consistent electricity? This country is one of the few where importers of generators make so much money. In this country we import a lot of generators even in public and private sectors. A huge chunk of our budget goes to generators and that is very bad. Any size of generator finds its way here and this is as a result of corruption. This is a country that cannot generate its own electricity and have good roads. What we have as roads are death traps. Even those in Abuja are bad. A country like that is wallowing in corruption. Have we ever had a credible election in this country? Look at the tribunal cases on elections. How many of the PDP victories were pronounced by the courts to be stolen mandates? And that is the same party we are talking about. So, it is a waste of my time to continue to list the wholesale corruption prevalent in this country.

What makes you think that elections would be chaotic?

If you look at what has been going on, even before the primaries, if you look at the way they have been killing themselves before the actual elections take place, obviously, it portends a chaotic situation. It is a matter of regret as Obasanjo said some years ago that elections for them is a matter of life and death. And it is obvious that in this election too, they would kill themselves and that is why I said earlier that I do not believe the elections would hold. If it holds at all, it could be inconclusive. I pray and wish that there would be an interim government rather than this continuation of corruption through fraudulent elections. From their previous experience, the people would not take any imposition this time around. I am sure of that.

Do you still foresee an alliance of the opposition parties?

It is a desirable thing. But I foresee a revolution that would bring about the end of the corrupt and bad government.

Is there possibility that some candidates may step down for one candidate before the election?

Unfortunately, I do not see a quintessential political leader being thrown up by a coalition of the opposition parties. This is due to many reasons. You see, in order to deliver good governance and advance the cause of progress and happiness for the people the leadership must have an identifiable, distinct ideology and a programme of action, But because of the way the parties are formed today in this country, none of them has been able to come out with an ideological compass that will take this country out of the present backwardness under this leadership. We remember that when we formed NAP, one of our most important programmes of action was that we were going to tackle corruption, which we metaphorically described as wiping off mosquitoes and rats.

We came up with a liberalist and socialist ideology by which we would promote development using the youths, the farmers and peasants or working in partnership with the intelligentsia, Nigerian engineers, and scientists, to be able to transform the economy. Nigerian economy is a mono economy based only on export of oil. Though huge resources are made from oil, but they are frittered into unproductive ventures and corruption. And so, you find that the youths of this country are unemployed and able-bodied men and women are hawking in the streets. The government is not addressing the problem of the education sector. Which of these political parties really understand the basis of transforming a county from being underdeveloped to develop within a certain length of time? This is because of the way parties are formed and because of the damage done by the military administrations of people like Obasanjo and Babangida. You find the imprints of these fellows still very visible in the politics of this country. You cannot get development until a break of this status quo is brought about by a revolution that we need very much and I know that until that takes place, we are not going anywhere.

What about the balancing in selection of running mates?

Do you see any possibility of PDP losing the elections?

I want the PDP to be kicked out of power. The continuation of PDP in the governance of this country is bad for us. PDP is synonymous to bad governance, corruption irresponsibility and self aggrandizement.

Is ethnic identity still a major issue in the nation's politics?

Can the problems of Nigeria ever be fixed?
Not until there is a major revolution in this country. Until then, I will say no. In fact, if we forcefully hold elections, it will only result in catastrophic crises that would affect the corporate entity of the country. But God forbid. And that is why there must be a revolution.

How will this revolution come?
It is coming. It is already at the door, knocking. In fact, the people have had enough. They are not interested in going out to vote. They want to change the government of this country. Revolution will come. Look, it is already spreading. Look at Tunisia, Egypt, Algeria, Libya and other Arab nations and the entire Middle East. I have heard journalists asking how the revolution will come, but it is already on. Can't you see? Already, people are protesting and demonstrating in the north, in the south, in the east and the west. You would see what happens when elections are conducted in the usual manner. Revolutions are not planned on the pages of the newspapers, nor are they discussed. I am sure there will be a revolution.

Do you still hold to the ethos of the eradication of the mosquitoes and rats as you enunciated earlier?

Oh yes. It is still a major, fundamental programme of NAP. Of course, that is not the only thing that we proposed. We also proposed to cede power, to dissolve power to the zones for rapid transformation of the zones. Presently, we have about six zones and we could increase the zones to about 10. You have the dynamic young generation having their talents freed through liberal programmes to build their own fortunes and we would have less importation of the junks that are shipped into this country in large quantities. Nigerians will produce things, sell and export what they produce to other countries. The energies of the youths and the intelligentsia will be unbundled for development in every zone of this country. We do not believe in the centralization of power. Too much power is concentrated in the centre. Who controls the centre? Corrupt elements, unimaginative people, who get to these places not by popular elections but by manipulations. So, we believe that those programmes are the best that could transform this country.

You haven't taken part in elections since 2003. Why?

Well, because I have come to the conclusion since the elections of 2003 that the elections of this country are far from being democratic. They don't conduct elections. Already, as I can tell you, they have the list of those who have been anointed for various offices. People's votes do not count in Nigeria. The international communities that pay lip service to democratic principles in this country are doing so for their selfish reasons. They would do business with anybody that emerge through manipulations. I speak authoritatively on this point that elections in Nigeria are far from being democratic.

They are selections and we cannot continue like that. In any case, we would not even be getting to that stage because they are very dishonourable and fraudulent. As I said earlier, the outcome of these tribunal cases bear that out. So, I have come to the realization that, not me alone by the way, that proper foundation for democracy must first of all be laid before you to talk of credible elections. Such proper foundation must deal with corruption.

Concerning corruption in the land, what is your assessment of the EFCC?

The EFCC, especially under this present leadership, in my judgment, is doing its best. But they are seriously hampered and obstructed by interferences of people with vested interests. Sometimes, the judiciary is not helpful in the fight against corruption. That should sound odd and it is odd. For instance, you read of some ridiculous sentences of convicted people. Where in the world would you ever see that somebody who had stolen large sums of money and had built a vast estate from proceeds of corruption get away with sentences of six months? Where in the world do you get that? It is a joke. So, you see, EFCC will arrest somebody with fanfare and that would be the end of what you would hear about the matter. There are so many obstacles to true national integrity. There is no national integrity as far as Nigeria is concerned, especially at the governing level.

You are experienced in legal practice. Why have you not earned the SAN title?

I don't see it as a big deal. But I can tell you that about three years ago, some members of the Bar Association felt strongly about the way the title of SAN are awarded. And they formed an association for the abolition of this title. It was led by a veteran, sound and committed lawyer, Tunji Gomez. I gave them tremendous support in their published reasons for seeking the abolition of the SAN. They stated quite clearly that the manner of its conferment is not only abused but also un-republican. In other words, it is an acronym but more importantly, it robs other energetic, dynamic, sound lawyers unjustly of their chance to advance.

They noted that the award of SAN in Nigeria denies so many good and proficient lawyers a level playing field, especially in Nigeria where there is widespread illiteracy and the fact that Nigerians love titles and want them by hook or crook. So, I have no doubts that the members of the legal profession would bring about the abolition of this anachronistic and useless title of SAN.