ELECTION RIGGERS WILL BE SHOCKED - JEGA 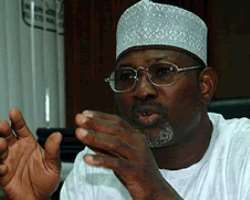 The INEC chairman told editors and news managers, in a meeting in Abuja, that politicians who are planning to hijack election materials, with a view to rigging the elections, would be wasting their time, as the INEC has put in place measures to detect electoral fraud.

Jega said that diversion of election materials would be detected immediately by INEC, as the commission would track the movement of vehicles from one point to another.

He said INEC would use the tracking devise in the vehicles of the Federal Road Safety Commission (FRSC), whose personnel would be involved in the movement of election materials.

The INEC chairman said that the commission had tested the FRSC tracking system, which is satellite based, and found it satisfactory, revealing that with the presence of the road safety commission's vehicles in the convoy of INEC, during the dispatch of election materials, the commission would know where the vehicles are, at any given time.

He revealed that if the materials are diverted, the INEC would know where it has been taken and take appropriate action.

Jega also revealed that the era of replacing ballot boxes is over, as the commission has in-built numbers on all ballot boxes. He said that if, for any reason, anybody swaps the ballot boxes, the person would be wasting his time, as INEC would detect it and therefore, invalidate the votes.

The INEC boss said ballot papers and result sheets also have security seals that would give anybody who changes them away.

He said that to ensure that results are collated accurately, INEC would use electronic collation system, which makes it possible for INEC headquarters to know the results as they come in, in the zones.

'We have deployed, on experimental bases, electronic collation system, so that before results are declared we would know at the headquarters,' he said.

The INEC boss said that with close circuit cameras INEC would know, at the headquarters what is happening at some polling units.

Meanwhile, as Nigerians decide today who would be in the Senate and House of Representatives, the list of candidates shows that more than 10 former governors are contesting to join the upper legislative chamber.

Saraki, Agagu, Oyinlola, Goje and Makarfi are contesting for the Senate seats on the platform of the Peoples Democratic Party, while Ngige is ACN candidate. Fayose is running on the ticket of Labour Party, with Ahmed Sani and Sheriff Musa contesting as All Nigeria Peoples Party (ANPP) senatorial candidates.

Akume, who is a serving minister, and Haruna are contesting on the ticket of the ACN.