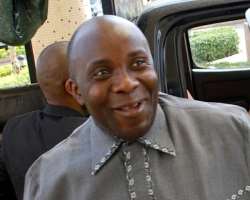 The politician was detained and charged for treason a few days ago by the police force following the multiple murders and destruction of properties running into several billions of naira in Akwa Ibom State during a clash between supporters of the ACN and those of the ruling PDP.

But at today’s bail hearing, Justice Adamu Bello ruled that the police had no ‘shred of evidence’ linking the guber candidate with the incident. The judge said the police wanted to hold the former Senator while it sourced evidence linking him to the crime, adding that the practice was not obtainable in law.

“The complainant wants to hold onto the accused person while they go around to fish for evidence which has no place in our law.

The bail was set in the sum of N10 million with one surety in like sum. The condition added that the surety must be a responsible citizen with landed property in the Federal Capital Territory (FCT), Abuja and must be a resident of the city.

However, Akpanudoedehe’s freedom was short lived as the police swooped into the court house to re-arrest him on a suspected similar charge with Akpanudeoedehe’s supporters alleging that the police and the Godswill Akpabio led Akwa Ibom State government had mapped out strategies to fly him to the Uyo for prosecution and possible incarceration without a chance of bail.

THEWILL correspondent reports that he was manhandled and slapped by a plain clothed security operative during his re-arrest, while court officials, lawyers, supporters and journalists looked on in shock and disappointment.

There has been no official word from the police on its next line of action on the matter.