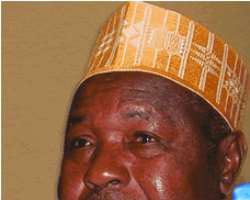 Last minutes efforts by former speaker of the House of Representatives, Alhaji Aminu Bello Masari to re-launch himself into the Katsina State governorship race on the platform of the Congress for Progressive Change (CPC) hit the rocks as a Federal High Court yesterday threw out the application to stop the execution of its judgment declaring Senator Yakubu Garba Lado as the authentic candidate of the party for the position for the April 16 elections.

Rather than grant the application, Justice Abdul Kafarati affirmed his earlier judgment that Senator Yakubu Garba Lado is the authentic candidate of the CPC in Katsina State as well as the candidature of 43 other candidates contesting for the Senate, Federal and State Houses of Assembly in the state.

The court had on February 25 halted Masari's ambition of becoming the Katsina State governor under the platform of the CPC when he held that Lado was the authentic gubernatorial candidate of the CPC in Katsina State.

Senator Lado and his running mate, Abdulaziz Yar'Adua had earlier asked the court to stop the CPC from submitting the name of the former Speaker or any other candidate other than him to Independent National Electoral Commission (INEC) as its governorship candidate for the state in the election.

The Judge, who dismissed the defendants' preliminary objection, said Lado's action was properly brought before the court, saying the plaintiffs had reasonable cause of action as they were the authentic candidates of the party in Katsina State.

The former Speaker and the CPC had filed an objection to Lado's suit on the ground that the way and manner a party elect or nominate its candidate for any elective position was an internal affair of the party and that the court lacked the jurisdiction to entertain the suit.

But Justice Kafarati, in his judgement, said with the 1999 Constitution of the Federal Republic of Nigeria as amended, the election or nomination of a party's candidate seized to be solely an internal affair of the party because the amended constitution provided that any aggrieved member of the party could sue if the process for electing or nominating the party's candidate violated the party guidelines and the Electoral Act, which were tailored in line with the constitution of the country.

The judge also held that the defendants failed woefully to bring any documentary evidence before the court to show there was another governorship primary election held by the party where Masari was elected.

Masari had gone before the Abuja Court of Appeal challenging Kafarati's judgment, which held in his judgement delivered on February 25 that Lado was the authentic gubernatorial candidate of the CPC in Katsina State.