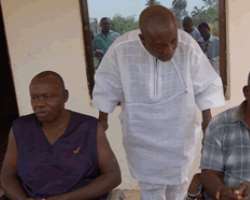 • MASSOB leader flanked by some of the war veterans

After 40 years the Nigerian-Biafran War ended, the Movement for the Actualization of the Sovereign State of Biafra (MASSOB) has started to rehabilitate the ex-Biafran war veterans who have been languishing at the Oji River camp in Enugu State.

MASSOB had embarked on a housing estate at its Okwe, Onuimo, Imo State headquarters to house the war veterans who were settled at the Oji River camp by the then East Central State Government in 1975.

The group has built 20 units of two-bedroom flats in an over 5,000 acres of land, which is directly opposite the Freedom House (Biafra House) in Okwe, the home town of the leader of the group, Chief Ralph Uwazuruike.

Thus when on January 14 this year the movement from Oji River to Okwe started, the ex-Biafran soldiers were highly excited.

Some of the beneficiaries of the houses who spoke to Daily Sun expressed gratitude to Chief Uwazuruike for providing them a new lease of life.

The owners of the acquired land for the estate, it was gathered have been adequately compensated except for three families who have gone to court.

A 73-year-old former Biafran soldier, Chief Israel Nwagbara from Obodun Ndoki in Ukwa East Local Government Area of Abia State told Daily Sun that they were taken to the Government Technical College (GTC) Enugu at the end of the Nigeria civil in 1970.

He said that they were relocated to Orji River Camp on July 29, 1975 and left there to their fate.

He said that prior to January 14, 2011 when they were relocated to Okwe Housing Estate they have been on the highways begging for alms to fend for themselves. The Biafran war veteran expressed gratitude to Chief Uwazuruike and urged other the well-to-do Igbo sons and daughters to support him.

The President of the Disabled Biafran War Veterans, Mr Lawrence Akpu from Mgbagbuwu in Enugu State and a father of six, said that he had no regret defending the Biafran territory.

According to him, if the opportunity comes up again, he will be ready to take up arms.

The 62-year-old ex-soldier who was a staff Sergeant during the war and had served at the 1st Demonstration Battalion of Biafra Army, Orlu said that he was injured on April 13, 1969 at Uzoakoli Sector in Abia State.

According to him, they (ex-Biafran war veterans) were forced to beg on the highways because of lack of care, adding that today they are full of praises to the MASSOB leader for providing them with decent accommodation.

Akpu said that he is currently disabled, but will continue to lend his support to young Igbo men to ensure the actualization of the Republic of Biafra.

His words: 'I will continue to encourage our younger ones to ensure the actualization of the Republic of Biafra. I am ready to fight again for the survival of Biafra; and Nigeria should grant us freedom.'

Speaking, the MASSOB leader, Uwazuruike, said that the purpose of setting up a housing estate for the wounded Biafran veterans was to give them a sense of belonging, saying that their labour to liberate Biafrans will not be in vain.

According to him, they fought for the survival of the majority of the Biafrans (Ndigbo), adding that 'as long as the struggle for the actualization of the Biafra Republic continues, they are the heroes and ours start where their own stopped,' disclosing that they did the construction of the housing estate to accommodate them and their families.

He said that the group has not received any dime from any foreign donor for the project or anybody within the country except dues paid by their members. 'Nobody has contributed a dime to the project except MASSOB members who are paying their dues.'

The MASSOB leader also disclosed that compensations have been paid to 28 families whose lands were acquired for the projects except three families who were in court.