TASK BEFORE ACN, APGA IN SCHEME TO UNSEAT PDP IN RIVERS 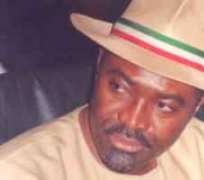 THE reality opposition political parties have always faced in the politics of River state is the uncompromising dominance of the Peoples Democratic Party (PDP).  Ahead of the general elections, it is almost taken for granted that the PDP will win and that the state governor, Chibuike Rotimi Amaechi, who is contesting against 27 other candidates, will sweep the polls.

But today, the PDP faces a huge task in its bid to retain its seats in the State House of Assembly and the National Assembly. The reason is the defection of some of its members to other parties.

But in the race for the Government House, Amaechi is favoured to beat his two main rivals in the Action Congress of Nigeria (ACN) and the All Grand Progressive Alliance (APGA). The two candidates incidentally are Amaechi's old political foes. The ACN candidate is former Minister of Transport, Abiye Sekibo while Celestine Omehia is of the APGA. The race is between Amaechi, Sekibo and Omehia.

Amechi, whose campaign slogan is 'change you can see' has based his re-election campaign on his projects and development programmes in the last three years.

The massive road network is something he said that he is proud of. Almost every section of the state is caught in this extensive network. Amaechi is building an unprecedented 700 modern primary schools equipped with Internet and modern learning art facilities. A university is under construction. The state government presently took over the payment of primary school teachers' salaries.

In the health sector, he has taken the initiative to build over 160 Health Centres. Existing General Hospitals in the 23 councils are being renovated and equipped to meet the medical needs of rural dwellers.

One issue in the election is security and every resident of the state knows how the state government moved aggressively against the menace of militants and restored relative peace in the state. At a rally in Okrika council, the home of Sekibo, Amaechi stressed that the situation in the state was so precarious that some of the governorship candidates relocated to Abuja.

One issue that not in Sekibo's favour is demography of voters in the state. A top PDP chieftain, who is his close associate said that it would be miraculous for Sekibo whose Okrika commands a voter's strength of less than 150,000 to win an incumbent governor from Ikwerre.

For instance, of the over 2.4 million registered voters in Rivers, about 1.2 million are in Amaechi's strategic strongholds: Port Harcourt, Obio-Akpor, Ikwerre and Emouha councils. He also enjoys support in Okrika despite the politically disastrous waterfront demolition gamble when he (Amaechi) dislodged militia groups that held the community ransom for years. Dislodging them restored normal socio-economic activities in Okrika.

A top PDP chieftain had said that disaffected members of the party had planned to form a formidable opposition to challenge Amaechi at the April polls. This plan was botched by the insistence of Sekibo and Omehia to run the governorship polls.

The animosity between Amaechi and Sekibo runs deep. In retrospect, Sekibo had nursed the idea of contesting the PDP governorship primaries in 2006 but was disqualified. Amaechi has never been his best pal.

Shortly after the Supreme Court ousted Omehia as governor of Rivers in 2007, Sekibo had filed a suit to challenge the verdict. He lost.

Following the emergence of Dr. Okwesilieze Nwodo, as PDP national chairman, Sekibo and other chieftains of the PDP like Omehia, Gabriel Pidomson petitioned him, accusing Amaechi of sidelining them. Their objective was geared at the dissolution of the party's state executive council led by Godspower Ake.

Their relationship was further exacerbated by the recommendations of the Truth and Reconciliation Commission chaired by renowned jurist, Justice Kayode Eso.

A White Paper on the Eso's panel report had indicted Sekibo for the destruction of Okuru-Ama community, during which several lives and properties worth millions of naira were destroyed.

The White Paper adopted the panel's recommendation for a fresh Judicial Commission of Inquiry to be set up to investigate the killing of Chief Marshal Harry and an Okrika chief, Gospel Bilogbolo.

However, the ACN is likely to suffer a major set back in the Kalabari speaking areas, which the PDP controls. The party enjoys sympathies in the Ogoni area and Ogba/Egbema/Ndoni council where former governor Dr. Peter Odili hails from.

The party, which was nurtured by the son of the Amanyanabo of Kalabari and former governorship candidate in 2007, Tonye Princewill, has lost its flavour in Akuku-Toru, Asari-Toru, and Degema due to Princewill's deflection to PDP and the circumstance in which Sekibo clinched the party's ticket.

One of the founding members of the ACN in the state, Asari Dokubo is alleged to have favoured his kinsman, 63-year old Itekena Michael Abel Tariah, who is now the governorship candidate of the All Nigerian Peoples Party (ANPP) for the ACN ticket. For because he lost his bid, he left the party in protest.

For Omehia, APGA is not deep rooted in Rivers. Though he is personally admired, many of his kinsmen see him as a spoiler. This view was strongly canvassed by former governor, Chief Rufus Ada-George, at the flag-off of Amaechi's campaign at Isiokpo, headquarters of Ikwerre council.

He recalled that during his tenure as Governor, Amaechi was to be appointed Commissioner for Education, but he (Amaechi) declined, and nominated Omehia, his cousin.

He has pledged that politically, his party will not engage in the politics of blackmail, threat to life and property, attack on personality and wasteful financial exercise.

'We would want to show that your character and proven record of integrity should speak for you. I present myself directly to the people of Rivers to assess me and then take decision on whether to vote for me or not. It is my belief that the power from the citizens should be given freely and directly without coercion or election malpractices,' he said.

Already, prominent Ikwerre politicians like former Deputy Speaker House of Representatives, Austin Opara are working with the likes of one time governorship aspirant, Chief Sergeant Awuse, for the re-election of the Amaechi.

Trouble, however, looms for the PDP in the state legislature election. Presently, in the 32 member state legislature, 20 lawmakers including the Deputy Speaker and the Chief Whip had failed to secure a return ticket.

In the House of Representatives, eight out of the 13 incumbent members were defeated in the last primaries. Some of those who lost their tickets defected to the ACN and ANPP and are gearing up for a showdown at the polls.

And out of the three senators from the state, only Senator Lee Maeba failed to get a return ticket. He lost to the Secretary to the State Government, Magnus Abe.

The former State Commissioner to the Niger Delta Development Commission (NDDC), Sheddrack Akuloku has defected to the ACN to contest against Senator Wilson Ake for the Rivers West Senatorial District seat.

Meanwhile some members of the state executive like Abe have resigned their positions in pursuit of their political aspirations and boost the chances of the PDP to secure its stranglehold position in the politics of the state.