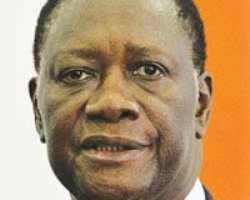 THE developed world, even in its self-appointed global watchdog's role, seems to have forgotten the looming implosion of Cote d'Ivoire. Its attention has shifted to other interests in Japan and the Middle East, especially Libya. As a result, West African leaders have risen to the challenge of preventing a major humanitarian crisis and refugee backlash of high proportions, as a result of the contagion from the war in Cote d'Ivoire. The heads of state and government of the authority of the Economic Community of West African States (ECOWAS) decided during their two-day 39th ordinary summit last week in Abuja to consider the employment of the ultimate sanctions regime.

The West African leaders have been facing an uphill in a bid to force out the country's defiant President Laurent Gbagbo. With their backs to the wall now, the leaders loathe the unfolding scenario where after a 10-year civil war, the struggle for power by Gbagbo and Alassane Ouattara adjudged by the international community to have the November 28, 2010 presidential runoff election, has left the country devastated.

Yet without the right political environment, efforts at economic integration and promotion of human security will continue to falter on the altar of capital flight and lack of inward investment.

The leaders that gathered in Abuja wanted the United Nations (UN) to step up its intervention mission in Cote d'Ivoire or risk a situation where the entire sub-region would be plunged into a humanitarian crisis of high proportion.

Chairman of the authority of ECOWAS heads of state, President Goodluck Ebele Jonathan clearly made this known at the opening session: 'We must come to terms with the reality of the grave threat it poses to the peace and security of the entire region. We have an abiding duty to remain resolved and united on our principled stand on the crisis…We must not make the mistake of underestimating the threat that the Cote d'Ivoire crisis poses to the sub-region…As the situation degenerates, the responsibility is on us to pass a resolution here to request the UN to take the Cote d'Ivoire situation a little more seriously.'

But relations between nations and also between powerful nations and other regions of the world are government by the national interests of such nations, which they define for themselves. In this calculation, the economic value of nations for example would determine the attention such nations and regions get from the dominant countries who call the shots at the UN and other blocks such as the European Union (EU).

A typical example of this diplomatic realism, which counts as a tall guide would be the United States (U.S.) engagement in Somalia in 1993. That year, the U.S. had forces deployed to the country to restore order in the aftermath of the deposition of President Siad Barre two years earlier. The country was on the brink following a division in the ranks of the rebel United Somali Congress as Ali Mahdi Mohammed and Mohammed Farah Aidid emerged at the same time. The Americans were backed by the UN Mission in Somalia (UNOSOM 2) but they pulled out after a few months in the wake of unexpected casualties and the sheer complexity of the situation on hand while Somali bandits and militants were disrupting operations and preventing relief materials from reaching the suffering people for whom they were meant. That kind of action gave credence to the theory of interests in international relations.

The American withdrawal created this impression of a nation that suddenly did not care about the ruination of Somalia as conflicts festered between the Somali National Movement (SNM), and other factions, heavy clan infighting, which led to famine and lawlessness throughout the country. At one point, an estimated 300,000 Somalis had died. Many more were dying. But even with the change of baton at the White House from President George H. W. Bush and Bill Clinton, the American policy in Somalia remained in tandem with American interest.

A few days before the Abuja summit, Nigeria through the Minister of Foreign Affairs Odein Ajumogobia (SAN) had decried the contradictions that produce double standards in the way the western powers relate with countries of different regions of the world.

Ajumogobia stated that seven pregnant women and tens of others have been slaughtered in Cote d'Ivoire amid other atrocities while the world busied itself with Libya, Yemen and Japan.

The federation of women from Cote d'Ivoire  (REPSFECO) was to later tell the ECOWAS heads of state during the summit that over 30 women have been killed in the renewed spate of violence.

Speaking with The Guardian in Abuja on what the women expect from the leaders, Salimata offered: 'With the deep crisis in our country, it is time to intensify and bring the war to a close. The experiences of Sierra Leone and Liberia have demonstrated to us that war in one country means war in the neighbouring countries. The war in Cote d'Ivoire takes us to the dark ages. We want help. Now the crisis in other parts of the world has overshadowed the problems of Cote d'Ivoire.

'We want the daily carnage to stop. We are powerless. We are helpless. We had no other option than to come here because we believe that if these presidents see us and hear directly from us, they would take pity and intervene in order to stop the killings as well as prevent the further killing of women and children.'

And they all talked tough. The special representative of the UN Secretary-General in West Africa, Ambassador Said Djinit pledged that the global body through its mission in Cote d'Ivoire (UNOCCI) will continue to press its mandate and protect the people of Cote d'Ivoire despite an increasingly violent environment. The African Union (AU) special representative, Ambassador George Shinkaye spoke in a similar fashion.

ECOWAS Commission President James Victor Gbeho seemed to be hinting of a regional body whose claws are tied even though he said the commission is committed to steering the community out of the food, fuel and financial crisis that 'seriously threatened to undermine our economic recovery and integration efforts.'

In what seems an adjustment of the earlier tough stand against the country's defiant Gbagbo, the regional body stressed that it was their (leaders') 'hope that we are able to resolve the situation without the need for a resort to the force of arms.'

Asking the UNSC to use 'all necessary means to protect the life and property of Ivoirians' as the crisis in that country deteriorates, remains an option.

But international conflict resolutions experts have since submitted that the clause in the country's constitution that makes the Constitutional Court the final arbiter in election disputes, compels mediators work more on the track of dialogue, even consider the formation of a Government of National Unity (GNU), which should consequently preside over a fresh election rather than barking and putting the fate of suffering Ivoriens in the hands of a UN that is clearly preoccupied by other 'more pressing' countries in accordance with the national interest of those who run the global body.