STEP DOWN: RIBADU, SHEKARAU UNDER PRESSURE TO QUIT FOR BUHARI - KAITA, EX-KATSINA GOV 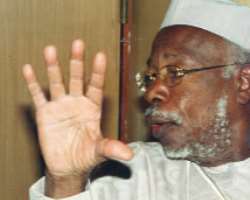 
The North will not fold its arms and watch President Goodluck Jonathan complete its remaining term of four years in the presidency.

Second Republic governor of Kaduna State, Lawal Kaita, who spoke to Daily Sun in Katsina, said the North remains adamant on zoning and is furious over the handling of this year's presidential primary of the ruling Peoples Democratic Party (PDP). Kaita says part of the game plan is to get other candidates from the North to step down for General Muhammadu Buhari.

His words: 'For the first time, you will see that the people of the North have honour. It is just unlike (some) people of the South who have no honour. We entered into agreement with these…

'We have come to the general elections where the ordinary people will vote. Have you heard a Katsina man shouting 'Sai Jonathan?' You can never hear it.'

Kaita, who is a close associate of the erstwhile consensus presidential candidate of the Northern Political Leaders Forum (NPLF) and former Vice President Atiku Abubakar, said the North has remained unhappy following the decision of President Jonathan to contest 2011 election, contrary to his agreement with the North. 'That is why we are going to the election with everybody drawing his sword. You don't know what is going to happen at the election. Only God knows how many people will die. We don't pray for anything but you, as a journalist, knows how hot the country is,' Kaita, 78, stated.

He also revealed that the North is likely to throw its weight behind the presidential candidate of the Congress for Progressive change (CPC) and former Head of State, Major-Gen. Muhammadu Buhari (rtd.), in the April 9 poll. The highly respected septuagenarian who spoke on several issues however, said that Atiku may have put the forthcoming presidential election behind him for now.

Excerpts:
You were conspicuously absent at the PDP presidential rally in Katsina. Are you still opposed to President Jonathan's ambition?

I don't believe in him being the next president; I believe this, the (2011) presidency is the turn of the North. I believe this should be a Northerner's turn, not a Southerner's. I am not against Jonathan as a person; as a principle, I don't welcome him.

The presidential election is around the corner, but many do not know what your close associate, former Vice President Atiku Abubakar, has up his sleeves. What are his plans?

Leave Atiku alone as far as this election is concerned. We are talking of three weeks to election now, what can he do with that? The PDP has rigged him out, what else can he do?

Sir, the coming elections promise to be of great expectations. Do you think it is better for the North to support PDP in the presidency?

No! You see, we are fighting based on principle, it is not for something to eat; When you are fighting on principle like this, there is no reason for us to succumb or give up the fight. We will fight up to the day the election is held. We still want a Northerner to be the President; it doesn't matter whether it is Atiku or not.

There are reported moves for the North to field a consensus candidate outside the PDP. What are the chances of such moves?

The negotiation is still on with Buhari, Shekarau and Nuhu Ridadu.

If they fail to reach a consensus, do you think any of them can defeat Jonathan?

It is going to be difficult for any of them to beat Jonathan as an individual, we agree, that is why we are fighting desperately for these people to come together; at least, for one of them to concede so that we can have our forces behind him (the consensus candidate).

What are the chances of such effort coming to fruition?

We will meet with the three of them.
On what platform are you meeting with them?
On PDP platform, I can say we are trying; we are pushing them, we have asked Emirs and chiefs to join hands with us to get all the votes of the North together. That is what we are doing; getting our votes together, which is several millions above the votes of the South.

With the support Jonathan has garnered, will it not be virtually impossible for any group or individual to stop him in the April 9 poll?

What support? What endorsement has he garnered in the North? He has come to Katsina, you were at the rally ground, his crowd was less than that of Lado Danmarke (governorship candidate of the CPC in Katsina State). And in any case, when people go to rallies, more than 50 to 60 per cent are paid agents. People were given N2,000 to come to his (Jonathan's) rally but they will collect his N2,000 and vote for a Northerner.

I assure you, Nigerians will see a shock election of their lives. These people you have seen in his rally will take his N2,000 and will vote for the candidate of their choice.

You expressed the same confidence ahead PDP presidential primary, but we saw the power of incumbency at play against your candidate?

This is a world of difference. When the power of incumbency was at play, it was only a handful of people involved. In Katsina, there were about 200 to 300 people (delegates) whom the governor or government could corner or tie them up; they were all appointed anyway; about 90 per cent were appointed.

I know here in Katsina a day before the election, about 18 national delegates were changed, and these were chairmen of local governments and so forth.

They could be removed overnight; they know it and none of them was allowed to fill the name of the candidates he likes. The forms were filled and given to them.

Ahead the NPLF's meeting with Buhari, Ribadu and Shekarau, who among them is your favourite?

If I have the opportunity, I will support Buhari, he is the one that definitely has the chance to win. Even now, he has an equal chance as Jonathan.

Do you entertain the fear that some of the Northern presidential candidates are being influenced by PDP to remain in the race?

How can they be influenced? They have never been in PDP any way. Shekarau was never in PDP, he is a governor in All Nigerian Peoples Party (ANPP). Nuhu Ribadu is a new comer; he was never in PDP. Why should I fear that PDP will influence them; because PDP has money or what?

The concern is that the plan would be aimed at splitting northerners' votes. How do you see such fear?

That is what some people say, but what is likely to happen is that for the first time you will see that the people of the North have honour. It is just unlike the people of the South, who have no honour. We entered into agreement with these…

(Cuts in) Many Northerners are equally supporting Jonathan…

(Cuts in) Hold it, that was for the purpose of the primaries. We have come to the general elections where ordinary person will now vote. Have you heard a Katsina man shouting: 'Sai Jonathan?' You will never hear it.

Even if a Katsina man says 'sai Shema' hundred times, he will never say: 'Sai Jonathan.' So, you people will be shocked over the (presidential) election outcome.

Are you confident that there will be free and fair elections?

Yes, I believe there will be free and fair elections. I believe Prof. Jega had been quite honest and decent; I trust him, I reason with him.

What is your message to President Jonathan?
He should not have contested in the first place. It is his intention to contest that has brought all these confusion. After all, Obasanjo contested yet, we Northerners gave him our votes to win, even though he is a Christian and a Yoruba man.

So, it is the dishonour, the dishonourable action of people that has brought the whole of this country into confusion. That is why we are going to the elections with everybody drawing his sword. You don't know what is going to happen on that Election Day; only God knows how many people will die. We don't pray for anything but you, as a journalist, know how hot the country is.

It is simply because of a dishonourable act. Obasanjo has done his two terms and Umaru did one term before he died, but Jonathan from the South wants the other term again. It is honourable for him to say he won't contest again and there will be no quarrel.

Why are you rooting for Buhari?
I am not saying Buhari is better than Shekarau or he is better than Nuhu Ribadu. What I am saying is he looks set to be the best person to challenge PDP and Jonathan. So, giving him the consensus help will simply facilitate his victory.

It is not that he is better than any of the other two contenders, but he has a better structure and a better followership than the others. On individual basis, none of them has more followership than Buhari . I am Atiku's man; 100 per cent, but I know the support for Buhari among ordinary people.

Is he doing enough to maximize the goodwill of the people?

Yes, he is everywhere. He has been to Port Harcourt, Katsina, everywhere. What can he do? He hasn't got government's money or machines but he is trying.