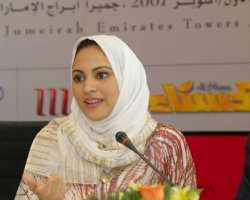 Since the ancient time the Kingdom of Saudi Arabia is one of those kingdoms blessed with people of different diversity, learned scholars of every standard as well as merchants who go to every length and breath to trade their materials ranging from cloth to gold, diamond and silver to mention but a few. In most recent the kingdom has become an amazing shining star among those countries blessed with petroleum.

The kingdom is blessed with men and women of every magnitude. One of them is Princess Muna Abu Sulayman, a media personality; International Humanitarian; Teacher; Mother; Divorcee and now Fashion designer.

Before, only those in the Middle East can attest to her service to humanity but today her name has become a household name across the world. One will be more interested if he comes across her wonderful contributions in taking women and their children, most especially the needy, to greater heights through empowerment programmes and initiatives as well as awareness campaign through the media in order to make them self reliant in the society.

Her generosity, kindness, foresight as well as hardwork cut across every angle of the kingdom. This inform her appointment by Alwaleed Bin Talal Foundation; owned and run by the People’s Prince of the region, HRH Prince Alwaleed, who see sound hardwork in her, this other qualities of leadership inform his decision of appointing her Secretary General of the said foundation. She was charged with spending up to 100 million dollars every year on good courses, she has one of the most important jobs in Saudi society today.

The aims and objectives of this foundation is to help reduce poverty globally; to provide effective, rapid and focused aid at times of natural disasters; to support research on the empowerment of women in local, regional and Islamic arenas; and to promote understanding between the Islamic world and the west.

Wherever you go in Saudi Arabia, it’s hard not to notice the work of the foundation. You could visit one of the 62 Mosques that have been built or drink from one of the numerous waterline networks set up in the kingdom. The work includes housing units donated to poverty stricken local families, electric generators that help illuminate remote villages, the funding hospitals, the provision of loans, and help to the poor who wish to get married but cannot afford the expenses, to mention but a few. Recently the foundation made tremendous efforts to victims of flood disaster where its donated 1,000 Kia Cars and about to built 10,000 apartments for them. In addition, it also made a giant stride in assisting victims of different calamities around the world, such as Haiti earth quake, Tsunami and recently Japan, among others.

Muna is an epitome of women emancipation in the Middle East. Though she is very prominent in the region, but she is very simple in achieving her desired goals. One of her attributes is no matter the difficulties or challenges when she pursue a cause she must reach to its conclusion, she was loved by her people because of her attitude of not giving up to something she is interested in or that can promote the living standard of the humanity.

She said about herself that: “I lived my life as Muna Abu Sulayman, a divorced mother of two, who is in her late 30’s, who is trying to reach her own potential and to whom Islam is a way of life, also I have learned to forgive myself, I have learned to be Zen about whatever life throws in my face. I have to appreciate the small success in my personal life, in my work and in my family and not to always look for the big bang success.''

When she was asked recently about her work couple with humanitarian challenges facing the international community, she replied thus: ``I have many concerns in the international community like others in the field; it is all about how we do our work so that each person we help has the dignity that he needs to be able to live a life not based on mere survival. My heart aches when I see how much pain and loss and poverty there is. It sometimes become too much to bear no matter how many peoples we help there are hundreds of millions that are not getting help.''

Muna Abu Sulayman has received many international awards. They include the Most Powerful Arab Woman. One of the important highlights of Muna's career was becoming one of the co-founding hosts of MBC's "Kalam Noua'em." KN, as it is known, is a TV show focusing on Arab family and female issues became Pan Arab no. 1 edutainment show for most of its broadcasting life. She left the show to start her own.

She has also started her own fashion line that would cater for women who want to wear chic and modern clothes that satisfy Middle Eastern sensibilities.

Since 1997 and until 2004, Muna Abu Sulayman has lectured in the English Department of King Saud University in Riyadh. Where very slowly she is completing her PhD in English Literature.

In 2004, Ms Abu Sulayman was named a Young Leader by the World Economic Forum.

In 2007, the Middle East Excellence Awards Institute presented Ms Abu Sulayman with the Achievements in Regional and International Relations Award.

In 2009, the Arab Woman Studies Centre presented Abu Sulayman with the Excellence Arab Women award for her great achievements and was selected a 2009 Yale World Fellow.

In 2010, she won the Colin Morley Award -- usually given to an individual who has contributed to the betterment of society through sustainable, socially responsible and humanistic behaviour.

Abu Sulayman is a board member of the:
•The Muslim Women’s Fund (MWF), which aims to strengthen Muslim Women, benefits families and communities.

•Soliya, an organization devoted to improving communications between East and West through university education.