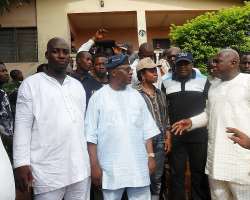 Ewi of Ado-Ekiti, Oba Rufus Aladesanmi Adejugbe has warned those perpetuating violence in the state to embrace peace, threatening that Obas in d state would place curse on anyone that cause blood-letting before, during and after the general elections.

Oba Adejugbe, while addressing PDP candidates, who visited him in his palace on Saturday said; "All Obas in Ekiti have resolved to place curse on anybody who perpetrate violence in Ekiti."

In his response, Alufa, who described himself as a thoroughbred Ado person said he lived the better part of his life in Ado both as a student and General Manager of Ekiti State Housing Corporation.

While urging voters in Ado to vote for the PDP in all the elections, Alufa promised to contribute his quota to the development of the state if elected.

Also speaking, Aluko said the PDP will remain the peace loving party that it is but warned that; "with what the rate of violence being perpetrated by the ACN against our members, I pray things won't get to such a level that we'll resort to self defence."

Addressing PDP supporters at the party's campaign rally held at Ojumose, Ado-Ekiti, senatorial chairman of the party, Chief Dipo Anisulowo said efforts must be intensified to sensitive the people on the need to vote for the PDP during the general elections.

He said voters must also be educated on the election guidelines and the need to make sure that votes are counted, recorded in relevant forms before leaving the polling stations.

The campaign rally, which took the candidates and their supporters round eight out of the 13 wards in Ado Local Government was graced by chieftains of the PDP, including former chairman of the local government, Mrs. Tosin Aluko, former House of Reps member, Hon.