I Never Prepared to Be Famous - Dakore Egbuson 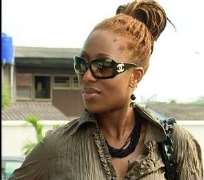 She is pretty, hardworking and multi-talented. The name Dakore Egbuson surely rings a bell to those who have been around since her career took a turn for good a few years back. Though in her teens when she discovered her talent at Corona School, Gbagada Lagos, Dakore has become a sweet face, a young and dynamic lady who has come to stamp her consciousness in Nollywood through her performance in Silent Tears, Play Boy, Tentacles and She Devils in the early years of her acting career. Her superlative performance of course stands her out and she made headlines. "My background has really helped my acting career. And I have been able to carve out a niche for myself and create my own name. People appreciate who I am. They love my work and even encourage me on the street. It is fantastic especially being a woman to carve out a niche for yourself so that you can raise your shoulder high and stand tall", she told Glitterati recently. And just when her rating as one of Nollywood's more talented actresses was on, fortuned smile at her again when she clinched Nigeria Amstel Malta as its model. This beautiful Bayelsa born damsel is also the spokesperson for Amnesty International and Oxfam of America against the control of arms and ammunition. In this revealing interview, Dakore Egbuson spoke with FUNKE OLAODE.

Can we have an insight into your family background?

My name is Dakore Egbuson, an indigene of Bayelsa State. Dakore is also an actor, a singer, and a model and television presenter. I am in my late 20s. I am the first born of my family. I have three brothers and a sister. I guess the responsibility that comes with being a leader; a first born is definitely there. But I have been able to lay a good example for my younger ones to inspire them that they can go for whatever they want and can be successful. My father was a building contractor. He had his own construction company and worked with Shell for several years. He is now retired in the United States. My mum is a caterer and at the same time taking care of the home.

I went to Corona School, Gbagada, Lagos one of the best schools in Nigeria which I am very proud of. It was at Corona that I discovered my talents. I always loved to act, dance and sing. I was a member of the choir and was everywhere doing something. I got a lot of time to express myself artistically. After my primary education at Corona, I proceeded to the Federal Government Girls' College, Bauchi. I was very adventurous as a child. I was very independent. I wanted to see the world and it was my first time being away from home on my own. It was a fantastic experience even though I was the youngest in the class and some students used to bully me. But it was fun because it was an eye opening experience. I got to meet a lot of students from all over Nigeria. You know before my sojourn in Bauchi I used to meet students from either Lagos or Ogun. But here were students from Gongola, Kaduna, Bauchi and so on. I had a wonderful experience. I finished from FGGC Bauchi and moved to University of Lagos for a diploma programme and later went for a degree in Mass Communication.

You have been in hot demand as a model and star actress lately. How did you rise to stardom?

Interestingly, I didn't finish my degree programme because I left in year three because of the incessant strikes, which was really bad in my time. I got fed up and went to London to develop my talents. I became an artiste and started working on Ben Television as a presenter. I was on the Black variety show with Ronke Apampa. I started doing music and even performed at The Royal Festival Hall, The Queen Elizabeth Hall with Tony Allen, Weird MC. I was doing well that I knew if I had stayed back in Nigeria, I wouldn't have had the opportunity. Things happen in your life that you just have to go with the flow, which I did. I am so grateful that I made that move because it made me to look inward and really know what I wanted as a person. Before I left for England I starred in four movies namely, Silent Tears, Play Boy, Tentacles and She Devils. The time those movies came out coincided with the strike. It was such a frustrating time for me. I was trying to finish school, I was trying to build up a career and Nigerian factors kept coming in. I decided to go to London. I was in London in 2000 when those four movies came out and people were looking for me. People were so impressed with my performance and they persuaded me to come home that Nollywood is really doing fine and all that. That was how my acting career blew up. I won an award for my role in Emotional Cry which was my fifth movie. The Emotional Cry which was released in 2003 shot me into the limelight and I rose to stardom and that of course made a turning point in my life.

You have been out of school for sometime and considering the fact that Nigeria is a certificate conscious country. Any hope of going back to school?

Oh yes. All over the world people respect professionals who are intellectually sound. Because of those who look at them as role models. I have done well for myself there is no doubt about it. I had my diploma where I majored in Public Relations and Advertising before I went for my degree in Mass Communication. If it wasn't the Nigerian factor that got in my way I would have finished my programme. I haven't ruled out going back to school totally. And now that I'm facing the next phase of my life I am going to finish up the remaining one year. I almost started a school in the US but film commitments set in. I was admitted to Syracuse University in New York, USA to continue my programme, I went for the interview and they loved me. They were so excited that they were going to have an African movie actress in their midst. This is where I am planning to go for my programme very soon.