CommuniquÃ©: Meeting Of NPLF And Igbo Political Forum On March 24, 2011 in Abuja 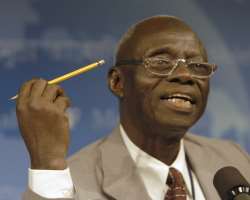 LEADER OF THE NPLF, MALLAM ADAMU CIROMA.
Listen to article

Preamble
On 10 August, 2010, the NPLF and the South-East Consultative Forum, now Igbo Political Forum, met at the Shehu Musa Yar’ adua centre in Abuja to renew the age-old strategic partnership between the North and the South East and to develop a unified position on the issue of power sharing in the context of Nigeria’s political experience since 1999. The two groups, as part of their on-going consultation and collaboration, arising from their common vision and purpose, met again on Thursday, 24 March, 2011 in Abuja to review the state of the nation and deliberate on other matters of common interest:

1. State of the Nation
After extensive and exhaustive deliberations on the state of the nation, with particular regard to the up-coming 2011 general elections, the political direction of the country and the survival of its democracy, the NPLF and IPF hereby resolved as follows:

i. We condemn, unequivocally, the culture of impunity, high level of intolerance, palpable tension and escalating violence, which has come to characterize the campaigns for the general elections of April 2011. We condemn, in specific terms, the intimidation, harassment and muzzling of political opponents by incumbent governments at all levels and the denial of right of assembly to opposition parties, including the denial of space for them to conduct their political campaigns. This ugly trend, if not arrested, is capable of derailing our democracy and of creating alternative means for the expression of dissent and discontent.

ii. We call on the nation's security agencies to refrain from open partisanship in their approach to security-related matters and return to their traditional role of protecting the lives, properties, freedoms and rights of all citizens without bias. A situation whereby agencies of state allow themselves to be used by the powers that be against ordinary citizens and political opponents is not conducive to the unity, peace and stability of the country. The upheaval now taking place in the Middle East and North Africa is directly attributable to the long period of political repression in that region and the highhandedness of the security agencies that support those repressive regimes. We call on the agencies of state to draw lessons from history or risk being its victim

2. INEC and the General Elections
After a thorough examination of the performance of INEC with regard to the preparations for the general elections, we noted that the Commission is trying to put in place the processes and proper procedures for free, fair, transparent and credible elections. We noted, particularly, an improved voter registration exercise, the display of voters register and the intensity of public enlightenment. We, however, observed that INEC, political parties and the judiciary have been unable to resolve the issue of candidates in some constituencies. This is a recipe for chaos. We called on all stakeholders - political parties, the government in power, the judiciary, civil society organisations and the general public to play their part to ensure that the general elections do not follow the path of the previous elections as the conduct of free and fair election is not the responsibility of INEC alone. We also called on all Nigerians to come out en-masse and vote in April and do everything within their power to defend their votes.

We reaffirmed our commitment to the principle and practice of zoning and rotation of key political offices in Nigeria, which we consider necessary and sacrosanct for the unity, peace and stability of Nigeria. We have therefore resolved to support any candidate who share our commitment to these principles and who is committed to practicing it. Such a candidate must, as a precondition, exhibit other qualities that a conducive to good governance - honesty, integrity, competence, sound policy direction and requisite experience. It is our conviction that the tension, violence, desperation for power, and the culture of impunity and intolerance that have thus far characterized the electioneering campaigns are directly related to the culture of dishonesty that has crept into our political life as well as consequences of the attempt by certain political elite to jettison enduring principles for national political consensus building and political inclusiveness. Those who come to equity, it is said, must come with clean hands.

4. We re-affirmed our position on term limits for key political offices, particularly the office of the President, to the extent that any occupier of the office in 2011 will not seek re-election in 2015, at which time the position will be rotated to another zone.

5. We also re-affirmed the imperative of national integration, not only at the level of political inclusiveness in every sphere of our plural society in the decision making process, but also the evolution of a well designed and carefully thought out Development Blueprint and Strategy that will have at its core the empowerment of Nigerians, creation of jobs and the provision of quality public services.

6. In consideration of the above, and in conformity with the basic principles already outlined, we urge our supporters and sympathizers across the country to be properly guided in their choice of candidates in the forthcoming general elections and to reject any candidate who does not posses these qualities or subscribe to these basic principles, does not honour them and will not realize them if or when he comes into office.

7. A 9-man Technical Committee has been set up to examine these issues in detail, explore viable options for the general election and make recommendation(s) to the plenary within the shortest possible time.