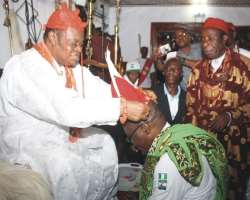 ACN GOVERNORSHIP CANDIDATE FOR RIVERS STATE, DR ABIYE SEKIBO RECEIVES THE TITLE OF 'OCHIRI OSA' OF OGBALAND (ONE WHO RULES WELL) FROM HIS EMINENCE, UDUDU CHUKWUMELA NNAN-OBI II, EZE OBA OF OGBALAND DURING HIS CAMPAIGN AT ONLGA.
Listen to article

The arrogance, intolerance and undemocratic nature of Governor Rotimi Chibuike Amaechi of Rivers State revealed itself more on Monday, March 21, 2011 when he disallowed the use of Rumueme playground in Obio/Akpor LGA of Rivers State for the governorship rally of the Action Congress of Nigeria (ACN).

Speaking at the rally which was quickly rescheduled, the ACN Governorship candidate Dr. Abiye Sekibo, said the ACN had paid for the venue at Rumueme in Obio Akpor local government area and approval for the rally obtained one week before Monday, March 21, 2011, with the party complying strictly with the guidelines for the hosting.

However, the Obio Akpor local government area Chairman, Mr. Timothy Nsirim and the Chief of Staff, Mr. Nyesom Wike acting on the orders of Governor Rotimi Amaechi prevented the party from holding their rally on the public playground.

Faithful party members who set out to prepare the Rumueme playground for the rally were met by groups led by Mr. Nyesom Wike and Mr. Timothy Nsirim who prevented them from carrying out their lawful activities, with the Chief of Staff unequivocally claiming that they were acting on the orders of the State governor.

Canopies and chairs set up for the rally were not only dislodged but also damaged and ACN' s schedule disrupted as thugs set about attacking and injuring whoever they could get at.

It would be recalled that the same Chairman had closed down the campaign secretariat of the ACN governorship candidate, Dr. Abiye Precious Sekibo, claiming also that he is acting on the order of Governor Amaechi

The ACN had been shouting out loud the intimidation and harassment the ruling party, the Peoples Democratic Party (PDP) led by Governor Amaechi had been meting out to the ACN, which it saw as a formidable party capable of constituting the government come May 29, 2011.

This latest action of Governor Amaechi has put to lie the denials of the government that it had never tried to intimidate or harass the ACN.

Ironically the ill advised move became a bonus for the ACN as the Apiti of Rumueme and father of Mr. Timothy Nsirim, the LGA chairman, Nyenweli O. N. Nsirim (MON) denounced the action and offered his palace ground for the rally to avoid crisis.