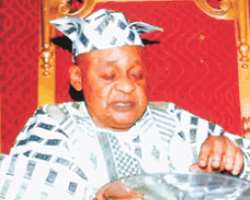 Wednesday, March 16, 2011, would continue to linger in the memories of the Oyo State Action Congress of Nigeria (ACN) governorship candidate, Senator Isiaka Abiola Ajimobi, and his campaign team as the permanent chairman of the state Council of Obas and Chiefs and the Alaafin of Oyo, Oba Lamidi Olayiwola Adeyemi, gave royal blessings to his ambition.

The event meant to be a campaign turned to a carnival as thousands of Oyo indigenes and residents trooped out en masse. The campaign convoy which landed in Oyo at 1 p.m., three hours behind schedule saw the people of the ancient town defying the scorching sun to receive the ACN campaign train led by former governor, Alhaji Lam Adesina.

The people who wore various unforms stormed the Ita Akesan playing ground singing various songs in their Oyo dialect emphasizing their support for Ajimobi. From the yet to be commissioned new Oyo-Ibadan Expressway, fleet of cars and busses adorned the road waiting for the ACN campaign team.

The convoy rode around Oyo town with pomp and pageantry as residents in the areas such as Sabo, Isale Oyo, Ashipa, Ilaka and others welcomed the team.

Some residents stayed in front of their houses with brooms to welcome the campaign team. The convoy arrived at the Akesan venue to the warm embrace of the excited crowd. Having performed the usual rituals of introduction and opening prayers, Ajimobi mounted the soapbox and promised the crowd that he would disappoint them.

He said his administration would provide good portable water and upgrade the Oyo mini-water works to ensure uninterrupted water supply. He thanked the people for coming out en masse to welcome him: 'Aside from the Mapo Hall campaign, this is the second time we would be having a mammoth crowd.'

Ajimobi maintained that Governor Adebayo Alao-Akala lacked the moral and intellectual capacity to govern the state assuring them that the ACN government would return smiles to their faces. He lamented over the high school fees which parents were forced to pay for their wards, stressing that it is criminal to race school fees to N150,000.

Adesinain his speech wondered why any cultured Yorubaman would fight and disrespect Alaafin: 'Alaafin is a foremost Oba in Yorubaland and Nigeria. We in the ACN love him and adore him.' He urged the people of Oyo to disregard the PDP and Accord Party (AP) candidates, describing them as monumental failures.

Adesina assured the electorates that the ACN government would provide for their needs and provide gainful employments for their wards. He called on the people to monitor their votes against rigging, stressing that all the residents of Oyo should vote for the ACN.

He advised Akala to start packing his property from the government house as well as start writing his handover notes: 'Akala should start packing now and ready to handover to Ajimobi. For Saki, Igboho, Iseyin, Omi Adio, Olomi, Okeho, Tede and other areas we had visited, it has always been massive turn out.'

Adesina also sought for forgiveness of  sins over the choice of candidates of the party, asserting that as a leaders he accepted his sin.

After presenting the candidates, the campaign train moved to the palace of Alaafin. Adesina assured the Alaafin that the ACN government would give Oyo town its dues in government. He regretted ever fighting the Alaafin and assured that such thing would not happen again: 'We know that from the crown you are in support of the ACN, we want to assure you that we wont disappoint you.'

Ajimobi promised the Alaafin who he described as an intellectual of higher pedigree to support the ACN asserting that his administration would not be an ingrate: 'Alaafin is my father, I am proud to be your son as you are a worthy leader who loves his people.'

Oba Adeyemi prayed for the success of Ajimobi and urged him to work assiduously for the progress of the state when elected: 'I don't want you to behave like an ingrate. He came here and other traditional rulers blessed him. He won but at the end of the day, he behaved and acted as an ingrate.' He also cautioned the political class against intolerance and the use of thugs, affirming that it was not good for our democracy.