THAT NIGERIANS MUST STAND UP 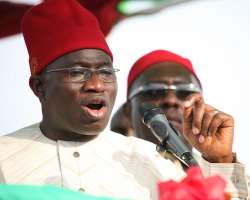 Now is not the time to train our eyes on the April 2011 national elections in Nigeria. Now is certainly not the time for politicians to indulge in costly assumptions about Nigerians, that they are eternally gullible. But now is the time to build what is more enduring, the base for a guaranteed Nigeria. This base must be rooted on freedom, equality, and justice.

The demographic statistics that show majority of Nigerian youths remain unemployed or unemployable should impress upon Nigerian rulers that these are no ordinary times. Rather than go about campaigning and making embarrassingly lame promises, Nigerian politicians should come around to the absolute truth that the foundations of Nigeria must be laid at this time; and the document that should underpin the foundation is a people’s constitution. All nations in Nigeria, through their elite who have the visionary dexterity to read the times, should pile pressure for a sovereign national conference. Except the foundation is laid, Nigeria shall keep on wobbling and under-performing. We must all come to our mount of Sinai and receive for ourselves the law that must guide our living in the Promised Land.

All civil rights organizations in Nigeria should begin to reach out to each other in order to form a coalition for restoration of Nigeria. We should not be concerned about who takes the credit for the victory that shall surely come as the sun remains. The usual politicians in Nigeria will remain averse to the kind of change that is coming to Nigeria. The change will hold leaders accountable; remove waste, which the 1999 constitution encourages; guarantee justice in wealth creation and equitable sharing; and encourage internal productivity and reward productivity.

We have seen how there is little or no difference between the major political parties, which do not respect the people’s choices whether in internal party affairs or inter-party contests. We have seen how there is intimidation among those parties. We all observe that the task of making a choice between non-desirable choices is a burden that Nigerians are called to bear.

Let us reason together:
1. The Benin-Ore road project has remained in the news since the Obasanjo era. What a shame that nobody has been called to give account and no government official or contractor has been punished for wasting public funds without good result?

2. Ibadan-Ilorin road project has been there for years since Obasanjo was president. How is it that nobody has been punished for wasting our resources without result?

3. The Ibadan-Lagos expressway remains a great indictment on the Nigerian government. In spite of all we have read about “road concession”, “work is under way” and “road expansion will soon commence” that road is yet in a deplorable state despite the fact that Nigeria made more money between 1999 and 2011 than in all of her history as one politically independent country.

4. The Ajaokuta-Okene express way is in a terribly deplorable state. Yet, that is the road that links the largest steel plant in Africa with other of Nigeria. Do we have a government?

5. I see funny advertisements on television about Nigeria generating mere 4000 mega watts of electricity under President Goodluck Jonathan. I am writing this article in Lagos, the largest industrial city in West Africa. There is no public electricity as I write. I am visiting with family members, and I am shocked that electric power supply in such an industrial city continues to be almost non-existent. I have vowed that, if for nothing else but simply to punish the ruling party, I shall not vote for any PDP candidate if at all the elections hold, which I don’t see as the urgent thing for Nigeria to do anyway at this time. If the ruling party understood the need to avoid the explosion of Nigeria due to unacceptable unemployment level among Nigerian youths, cities such as Lagos would not be starved of electricity.

I can go on to show how there is no accountability and just use of our commonwealth today. I can talk of the singsong about constructing a new bridge across the River Niger to link Asaba on one side with Onitsha on the other. I can talk about the lack of shame in our senate president; the road between his town Otukpo and Otukpa, the major road linking Benue State (and other states north of Benue) with the eastern part of Nigeria, is a complete eye sore with deep gullies stretching many miles, which scar and deface the surface leaving snakes of red-clay cleavages like ancient facial marks etched on the face of an African man or woman. When I commented on this road to someone’s hearing, I was told that Senate President David Mark visits his town in a helicopter. I would not be surprised if this is true. How about the Otta-Abeokuta road (the axis of Obasanjo and Speaker Bankole)? I am tempted to believe that when Nigerian rulers, known for their fetish practices, embark on spiritual pilgrimages at the altars of devils in Nigeria seeking political power one of the prices imposed on them is that their subjects shall never enjoy their leadership. How else can one explain this crunching poverty amidst so much wealth? My eyes get misted up when I drive by and see young boys and girls who should be in school scrounging for a living on our city roads of confusion, sweating profusely in the hot sun, and rushing at moving vehicles to sell their wares. Oh, what a nation!

Now is the time for Nigerians to stand up. Now is not the time for ecstasy about elections. We must break down this present edifice and build a new one. How that shall happen is in your hands the Nigerian. Instigating leadership is not lacking, the time is now.

Leonard Karshima Shilgba is an Associate Professor of Mathematics with the American University of Nigeria and President of the Nigeria Rally Movement. TEL: +234 (0) 8055024356; EMAIL: [email protected]