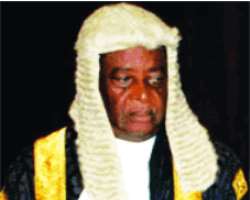 As the controversy over the face-off between the Chief Justice of Nigeria, Justice Aloysius Kastina-Alu and the President of the Court of Appeal, Justice Ayo Isa Salami continues, a Senior Advocate of Nigeria (SAN), Joe Kyari-Gadzama has described calls for their resignation as premature.

Speaking in Abuja during an interactive session with judiciary correspondents, Gadzama also faulted the high- powered panel led by T.J Onigbo Okpoko which was set up by the Nigeria Bar Association to investigate the allegations of corruption against the two legal icons noting that it had no effect in law and and could only be advisory.

According to Gadzama, 'I think the calls for the resignation of Justice Kastina-Alu and Justice Salami is premature. The National Judicial Council [NJC] which has the powers to discipline erring judges has in its wisdom set up the five-man panel led by Justice Umaru Abdulahi a former president of the Court of Appeal whose integrity was not in doubt.

'I believe that the investigations should be allowed to go through the whole hog and at the end of the day, if anyone of them is found guilty, he should face the full weight of the law. Even the panelists in the Court of Appeal panels in Ekiti, Osun and other states that were fingered and facing the panels should be made to face the music if found culpable,' he declared.

He stated that the setting up of the Umaru Abdulahi panel by the NJC had provided the nation with a golden opportunity to clean the augean stables adding, 'it is a pity that it has happened. We in the legal profession are not happy about it, but you have to remember that judges are also human beings and are therefore fallible.

My position on the issue is that despite all the publicity, it is a golden opportunity for the nation's judiciary to clear its name and assert itself and show the world that it can solve its problems. 'I commend the decision of the NJC to appoint an independent panel to probe the allegations. On the panel set up by the NBA, my personal view is that the NBA is not a body saddled with the responsibility of probing judges and pronouncing them guilty. Well, it is a decision of NEC which of course is bigger than my humble self. But I believe that whatever is its decision would be advisory,' he stated.

Gadzama, while reacting to the decision of the Independent National Electoral Commission (INEC) to challenge the decision of an Abuja Federal High Court that stopped it from conducting elections in fives states of the federation in April noted; 'generally speaking, INEC must be independent, neutral and an unbiased umpire as it is obtained everywhere in the world as it relates to elections and in the interest of the development of the law. I think that there is nothing wrong in the Commission challenging the decision at the Court of Appeal.

'Afterall, it was a party in the matter. So, it has a major stake in the mattter. It has a duty to ensure that the right thing is done. There is a new regime in INEC, so I don't see anything wrong in the Commission challenging the decisions of the court at the Court of Appeal,' he added. Gadzama also faulted the contradictory decisions of the various decisions of the Court of Appeal wherein in similar cases and circumstaces, their decisions contradicted themselves noting, 'I think it is time we adopt what is obtainable in Syngapore which makes it mandatory for any person that raises allegations of corruption to prove his case or goes to jail.

'This is unlike what is obtainable in Nigeria where judges and public servants are maligned everyday without a shread of evidence and nothing happens.