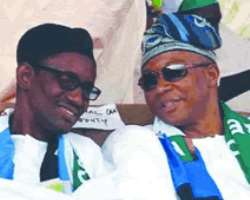 The Action Congress of Nigeria (ACN) presidential candidate, Mallam Nuhu Ribadu, would take his campaign to Ado-Ekiti, the Ekiti State capital, on March 21.

Governors Babatunde Fashola, Adams Oshiomhole and Rauf Aregbesola of Lagos, Edo and Osun States respectively and other national leaders of the party are expected to address the rally.

Ekiti State Governor, Dr. Kayode Fayemi, has approved the constitution of a committee that would plan and make arrangements for the success of the presidential campaign of the ACN in the state.

The committee is chaired by the Secretary to the Ekiti State Government (SSG), Dr. Ganiyu Owolabi.

Ribadu, who had taken his campaign to other parts of the country, is expected to unfold his agenda to the natives of Ekiti State in what promises to be another round of the 'Broom Revolution Rally.'

Although there would be no governorship election in the state in April, elections are expected to be conducted into the Senate, House of Representatives and House of Assembly.