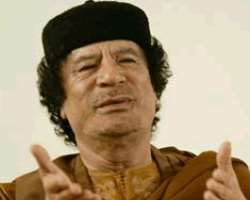 •Gaddafi
The recent political imbroglio in different parts of Africa, particularly in the northern fringes of the continent, is a testament to the will of a people in search of true freedom.

Before now, most of the struggles for political relevance and its subsequent effects, which mostly results into bloody reprisal violence, used to be confined to sub-Sahara Africa, with West Africa accounting for the largest chunk of these scenarios. But whilst most of the revolutions in West Africa have ended up in failures that have left the peoples worse off by ensuring the status quo to remain in place, recent situations in North African countries have resulted into more successful experiences that have attracted global notice.

It is to this unending cascade of violence in West Africa that socio-political and economic development becomes a mirage, while the world and international media feast on its bloody outcomes in order to feed the insatiable desires of their gullible listeners. As a result, when Nigeria, in March 2010, was undergoing series of socio-political upheavals, as a result of the long absence of the late president from office, the Jos violence and the rise of Boko-Haram onslaught, the current embattled leader of Libya, Col. Muammar Gaddafi, abruptly suggested that the country should be divided into two nations along religious lines.

Ironically, he was addressing some students in his country when he made that unfortunate call and incidentally, those same students and youth are in the vanguard of those calling for his job and maybe more, his life, if he refuses to vacate the office he has occupied since 1969. He made this call in a speech, where he praised the example of India and Pakistan in 1947 saying the 'partition saved the lives of millions of Hindus and Muslims.' Splitting Nigeria, 'would stop the bloodshed and burning of places of worship,' quoted Jana, the Libyan News agency back then. In continuation, Gaddafi, former chairman of the African Union, described the violence in Jos as a, 'deep conflict of religious nature' caused by the federal state, 'which was made and imposed by the British, in spite of the people's resistance to it.'

He described the partition of India as a 'historic and radical solution.' Old India nation split in 1947 into a Muslim Pakistan and Hindu-India. The report by BBC said that the Libyan leader has a history of making such boisterous calls as he called for the abolishment of Switzerland the year before, saying the Swiss land should be divided among Italy, Germany and France.

Of course, the Nigerian governments' reaction was instantaneous and decisive over such recklessness. She registered her displeasure as well by recalling her envoy from that country and even caused a near break of diplomatic ties with Libya, where the Nigerian government became suspicious of the motives of the Libyan government about possibly sponsoring violence in the country.

But the real question should be a focus on subsequent events that have taken place since the comment credited to Col. Gaddafi on Nigeria, and the present political realities in the people's republic of Libya. It beats one's imagination that in less than a year after such an ignominious statement by Gaddafi, Nigeria remains united, stronger and appears to be sorting out its peculiar issues. On the other hand, the fiefdom under the date eating self-styled Arab leader is falling apart, with the richer parts of the country; Benghazi, being under the strong hold of dissident rebel factions that are hell bent on seeing an end to the rule of Gaddafi.

Benghazi is the second largest city in Libya, the main city (or capital) of the Cyrenaica region (or ex-Province), located in the eastern region of the country, a tourist hub and an important aspect of the nation's economic indices. Loosing this region is more than a blow to Gaddafi's misconstrued continental vision.

While little have escaped the perception of several African leaders that Gaddafi secretly nurses the futile ambition to become leader of his imaginative 'United States of Africa', perhaps, a few more may not be unaware that for obvious reasons, Nigeria remains the biggest stumbling block to the realization of such an overrated pipe dream.

The way fortune changes in politics in historical terms always seem to defy logic. Right from the glorious centuries before the Byzantine Empire to the era of Roman domination to modern day political acclimatization, nations have risen and fallen based on the fickle desires of its people's demands for change.

The call for change by the Nigerian people is being articulated through entrenched demand for democratic principles hinged on the rule of law, free, fair and credible electoral processes as well as a more involved people oriented governance based on mutual respect and recognition. To categorically state that Nigerian now have access to these demands, is to speak from double angles of the mouth.

It is obvious that the above observation is becoming clearer to the people of Nigeria, hence the demand for a competent political class of leaders who do not necessarily have to be from a particular region or tribe. If this is achieved, then religion or tribal proclivities can be damned.

The remnants of anti-change agents, who belong to the expiring class of old leader in the country tend to, launch a last stand crusade by hauling and dredging the principle of zoning into the political fray of the country in order to whip up tribal sentiments into the political equation. Progressive minded Nigerians must resist this option. For zoning to be permanently buried in Nigeria's politics, the proponents of change must bury the ideologies of the 'pro-zoning' politicians with the funeral party that is inevitably going to be the end of Gaddafi in the nearer future of Libya.