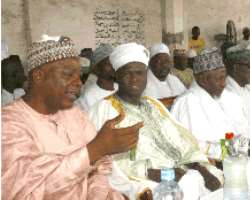 All praise is due to Allaah, Lord of the worlds. May peace and blessings be upon His Prophet Muhammad, his family and companions. Brothers in faith! Fear Allaah and be dutiful to Him. Always be conscious of Him and know that you will meet Him and that He will compensate every soul for what it has earned on the day that no soul will be treated unjustly.

Fellow Muslims! Man's aspiration to attain high ranks and degrees of virtue and his efforts towards achieving perfection in matters of religion and life is clear evidence of his sound mind and fine intellectual and psychological structure. It is also a sign of his entitlement to all the good of this world and the next. Such a man rises above the standard of the low-minded people, those who have no will to aim high, who are indifferent and lazy and are pleased to live on the sidelines of life.

In contrast to the people of high-mindedness is another group of people who seek abhorrent objectives that no sensible person would ever desire or even cast a look at. These include aspiring to commit sins that Allah and His Prophet (peace be upon him) have forbidden and warned against and aspiring to snatch away blessings from Allaah that others have acquired. These people wish to seize these blessings for themselves without earning them. They would resort to jealousy, injustice and aggression to achieve their aims.

It is from Allaah's Mercy and Kindness to His slaves that He ordained for them, through Islaam, laws and regulations with which He shows them the correct way, thereby directing all attention to His straight path.

He explained for them the finest personal qualities that may keep them away from ill intention and repugnant behaviour. He promotes social harmony among Muslims by providing opportunities for each individual that are commensurate to their talent, ability and nature. He also makes every sensible person realise with certainty that making efforts to achieve unlawful aspirations is ultimately harmful to their soul and leads to a miserable life, this would entail treating Allaah's favours with disdain and ungratefulness. This is in addition to the destructive war that such a situation wages on our acceptance of established Islamic norms as well as the evils and calamities that emanate from this. All this and the fact that this is the cause of wasting one's precious life away with base desires that are neither useful nor sensible.

During the time of the Messenger of Allaah, the Muslim women sought that which Allaah had made exclusively for men. They wanted a share of jihaad in the way of Allaah to defend the truth and spread guidance. They also wanted to have an equal share of inheritance. The men for their part wanted to be given preference over women in the reward for their good deeds due to them being given a larger share of inheritance. Allaah diverted both groups away from these inappropriate wishes to that which would be of benefit to them.

Brothers in Islam! Some people may think that the prohibition that is in the verse quoted above is contrary to the saying of the Prophet (peace be upon him) as reported by Al-Bukhaari: 'There should be no jealousy except in two things:

A man that Allaah endowed with the knowledge of the Qur'aan who recites it day and night while a neighbour of his hears this and says, 'I wish I was endowed with the same as that which so and so is endowed with so that I could do as he does'; and a man whom Allaah blessed with wealth who spends it in His  cause  while another man observes this and says, 'How I wish I was blessed with what so and so is blessed with so that I could do as he does.' The fact of the matter is that, there is no contradiction between the verse and the hadeeth.

This is because the 'jealousy' mentioned in the hadeeth is of a positive nature. It is actually just a yearning for the like of what the blessed one has. This is lawful and not forbidden. What is forbidden in the verse is wishing to have the same blessing as others whilst at the same time wanting it to be withdrawn from the one who already has it. Indeed this is what is forbidden by the verse. We should all therefore fear Allaah, and hold fast to the guidance of the Qur'aan and Sunnah in order that we may be among the prosperous ones.

Adepoju urges Muslim Ummah to rise from their slumber

A renowned religious leader, and Jihadist, Sheikh Mas'ud Olarewaju Adepoju has called on Muslims to rise from their slumber and contribute their quota, individually and jointly, to the promotion and propagation of Islam for Islamic awakening.

Sheikh Adepoju who is also the National Vice President, Federation of Ahlus - Sunnah Organisations of Nigeria and Amir (Spiritual Head) Universal Muslim Brotherhood (UMB), in a statement to Nigerian Muslims, frowned at the nonchalant attitude of many Muslims towards the propagation of Islam.

He enjoined them to rise up to the challenge of faithfully and religiously propagating the religion of God-Islam, irrespective of their position or status in the society.

Sheikh Adepoju further stressed the need for Muslims to retrace their steps and rededicate themselves to growing the seed of love and unity, as did the first generations of Muslims known for their sincerity of purpose and willingness to help one another. The Islamic leader was also worried that the Muslim Ummah had been polarized such that one group claims superiority over another, and would not help one another. He said some even arrogate to themselves piety over which the Quran clearly says Allah alone can determine.

The religious leader added that for the Muslim Ummah to progress and establish itself, unity and love must be the watchwords. 'Our rich brothers must ensure the less privileged too get quality education and better living, being the teaching and practice of the Holy Prophet.

'Muslim Ummah has deviated from oneness and unity, hence, the reason Muslims suffer persecution and discrimination. The Quran states what ways to achieve peace in the troubled world and allow humanity establish the purpose of existence. To forge ahead Muslims have to transcend the divisions, which are the byproducts of the ill-conceived schemes of small men.'

He enjoined Muslims to have Taqwa (fear of God) in all their acts and deeds, quoting Quran 2:177 that, it is righteousness to believe in God and the Last Day and the angels, the Books and the Messenger and to be steadfast in prayer and to give to the needy.' To fulfill the covenants you have made and to be firm and patient in terms of pain, adversity and panic … such are God-conscious Muslims.