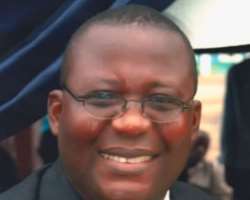 The frosty relationship between the Emmanuel Uduaghan, governor of Delta and Elder Godsay Orubebe, minister of Niger Delta Affairs, took a turn for the worst, today, as the governor took a pound of flesh and sacked the ministers cousin from his cabinet. Huhuonline.com investigations, reveals that the weekly Thursday Exco meeting which is the third since Governor Uduaghan assumed office after his victory at the re-run elections earlier scheduled for 01:00 pm was rescheduled for 11:00 am.However, Uduaghan has been back in office for eight weeks.

Huhuonline.com gathered that Dr. (Bar.) Bibobra Bello Orubebe, commissioner for Special Duties, was said to have arrived the Exco chambers a few minutes into the session presided over by Governor Uduaghan and quietly went to take his seat when the governor asked, 'Are you still with us?'. The question was said to have irked Orubebe who retorted, 'Why are you asking that kind of question? Have I not always been with you?'.

The retort in the presence of other serving commissioners however angered Governor Uduaghan, who said, 'Please excuse us in this meeting'. Consequently, Orubebe picked up his files and slammed the door of the Exco chambers behind him.

Orubebe was appointed by Governor Uduaghan as commissioner for environment and was later deployed to oversee the Ugbenu-Koko road project as Special Duties commissioner during Prince Sam Obi's tenure as acting governor of Delta state.

A statement signed by the Secretary to the State Government (SSG), Dame (Dr.) Beatrice A. Omeni and dated March 10, 2011 reads: 'It is hereby announced for the information of the general public that the Governor of Delta state, His Excellency, Dr. Emmanuel Eweta Uduaghan has effected a slight change in the composition of his cabinet.

'Consequently, Dr. (Barr.) Bibobra Bello Orubebe, Commissioner for Special Duties in charge of Ugbenu-Koko road, has been dropped as a civil commissioner and member of the state executive council of the Delta state government.'

While briefing journalists in Asaba, the state commissioner for information, Mr. Oma Djebah who denied any complicity in the sack of Orubebe, said that 'Governor Uduaghan has only exercised one of the powers bestowed on him by the constitution.'

Despite further probe on the immediate cause of the sack, Djebah tactfully avoided answering to the questions.

Efforts by Huhuonline.com to reach Orubebe proved abortive as he refused to pick his calls but a very close source to him confided in our reporter that 'the former commissioner Orubebe did not want to respond to the sack because he was still studying the situation and would soon come up with an appropriate reaction to this very sad incident'.

It could recalled that Governor Emmanuel Uduaghan and Minister for Niger Delta Affairs, Elder Godsday Orubebe has been reported as a power tussle within the Peoples Democratic Party (PDP) for the governorship ticket of Delta state.

However, the recent coming of President Goddluck Jonathan to Delta state during his presidential campaign rally had doused any existing disagreements between both men until this latest development.