BODE GEORGE: A BACKBONE FOR PDP? 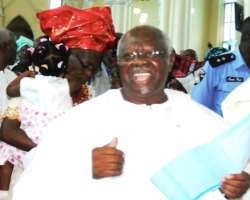 “Bode did not conduct himself properly when he was in prison. He was doing things as if he is the lord of the manor. When Awolowo was in prison in Calabar, he did not misbehave but Bode was trying to run PDP affairs from prison. That was a mistake”. These are the words of former President Olusegun Obasanjo on Bode Goerge, despite he attended Bode’s controversial ceremony.

Many people who did not know former chairman of Nigerian Ports Authority (NPA), Chief Bode George or why he was hosted in the kirikiri had the opportunity to know him during the church reception organized for his freedom from the prison. A lot have expressed disgust over the glamorous event. Why have so many Nigerians suddenly become surprised about what some people in Nigeria who have had the opportunity to “chop” the national cake can do?

The truth cannot be hidden that some individuals and groups in this country would attempt to have their ways through whatever means without recourse to criticism. They have constituted themselves into demigods and the commoners from the Nigerian society are left to the mercy of the very patient but not oblivious God. Bode George has proved to be one of the demigods in the political circles of Nigeria, whatever his crimes may have been.

Why will he not rejoice? Why will his cronies and political empire not revel for his freedom? Insight into his freedom reveals a lot. One, he came out from ¬the kirikiri prison alive; not only alive but strong in mind and thought. Many Nigerians who are held behind bars for even minor crimes do not succeed in regaining their freedom easily. Some cannot even return back to their homes alive. So, Bode knows how Nigeria is run; he knows that those feathers like him cannot in any way leave him out in the political and especially electioneering processes.

Moreover, he is a big man who is very much favoured and blessed by government. Big men or to put it rightly big and rough politicians are untouchables in this society. And events have proved that once you are in that group, you are protected. Remember that many presumed political bigwigs have had such experiences and nothing or very little was said in the past. A recurring instance is former president Olusegun Obasanjo who was rescued from prison and was, amidst wild reservations, made president under the PDP.

Also, he may belong to spiritual society where anything is done to protect a member against any non-member individual or society. And under no circumstance is the interest of non-member considered. So, those Nigerians who feel things should be done the right ways could be regarded as non-members. That is why shame and cruelty have no meaning in Nigeria while honour (including honourary titles like national and institutional), patriotism, humanity and fraternity have eluded us. The Nigerian society is a component where the good and bad are intertwined. Celebrating an ex-convict in religious places is very common in Nigeria. After all, some of the religious leaders feed from known and secret criminals in the society.

I was all ears during a programme on Ray Power 100.5 FM Political Platform when a caller briefly narrated the discussion between him and his little primary school child when they watched the ceremony for Bode George on African Independent Television (AIT). The child asked the father who Bode was and the father said he was a thief. The child was surprised. She then asked the dad how a thief is being celebrated. The father was dumbfounded with this observation from a little innocent Nigerian child.

When the father could not saturate the child’s conscience with convincing answers, the child with good intentions and wishes for the dad asked, “If so dad, why don’t you steal so that you can be celebrated (even in religious places)?” The father simply told the child that it was not good to steal.

Another postulation from a man was, “If you want to steal in Nigeria, do not steal in tens, hundreds or even millions; Steal in billions and if you have your way, create a dynasty of you own with the nation’s fortunes. When they claim that they have caught you, many Senior Advocates of Nigeria (SAN) and Justices will be very glad to share the wealth with you. You are either acquitted and freed or you are carefully convicted to serve a certain number of days behind the bars so that on the day you come out of prison, you are celebrated in the streets and in religious places. Your juju priest will make his or her own merriment with you at the appropriate time.”

However, the Bode celebration has generated wild criticism in the society. The Conference of Nigerian Political Parties (CNPP) recently described it “the obscene celebration of an ex-convict” noting that the presence of eminent citizens including ex-president Chief Olusegun Obasanjo, Governor Gbenga Daniel, ex-governors and two serving ministers at the reception signified celebration of fraud.

CNPP also observed that it was at a great loss where to locate President Goodluck Jonathan’s much publicized zero tolerance to corruption and his anti-graft crusade when Mr President, against the best ethical traditions, delegated a minister of cabinet rank, Minister of Defence Prince Adetokunbo Kayode, to represent him at the obscene celebration.

The CNPP was quoted to have said in a statement, “We are appalled that the president of our dear country can openly without prejudice to his oath of office, celebrate a man who was convicted for 163 count criminal charges bordering on abuse of public trust, contract splitting and financial misappropriation to the tune of N100 billion. What lessons or legacies are we bequeathing to future generations when we are celebrating a man who went to prison not for political charges but for criminal charges?”

In the same vein, the Action Congress of Nigeria (ACN) simply described the celebration as very unfortunate for the Peoples Democratic Party (PDP) to have associated with shame and corruption by rejoicing for Bode George.

The party said “PDP’s action sends a wrong signal to Nigerian youths that it is alright to steal or mismanage public funds, since it can even turn them into a ‘hero’ like Bode George. There is nothing wrong in rehabilitating a prisoner. But turning an occasion that calls for penitence and soberness to a carnival of sorts is a disservice to Nigeria, and a clear signal that the wobbly anti-corruption war of the Goodluck Jonathan administration is finally dead. It also ridicules Nigeria in the eyes of the world.”

But PDP dismissed the criticisms, claiming that the assault on the party was unnecessary because the thanksgiving service was organised by members of his family, friends and well wishers. Hear the party speak, “It is on record, that Chief Bode George, a PDP leader and former Deputy National Chairman (South) of the party, was tried and convicted under a PDP government, as part of its anti-corruption war. This fact alone speaks volumes of the commitment of the party to the war against corruption”, challenging Action Congress of Nigeria (ACN) and the Congress for Progressive Change (CPC) to show evidence that they have ever punished any of their members for any corruption.”

“The EFCC during President Jonathan has recorded the highest record of confiscation of assets of public officers who have abused their offices. More than N800billion have been recovered from the banking sector alone. It has also recorded more convictions.”

But the Central Bank of Nigeria (CBN) under Sule Lamido is never as it was before. The truth is simply because Lamido has refused to be bent. And again, since the return of Nigeria to democracy in 1999, no other party has had access to the nation’s treasury than the PDP. Recall that Nuhu Ribadu was accused during his tenure as the Chairman of the Economic and Financial Crimes Commission of shielding Bode George. He was arrested, arraigned and jailed under Farida Waziri as she recently asserted in London, “We have lots of convictions and recovered billions of money from criminals, but I am not a noise maker and this is not a noise-making job. This job requires you to strategize, plan quietly, arrest, arraign and prosecute suspects, but in a country where many people are ignorant, they want to hear noises”.

Bode George could have gone home and quietly celebrate with friends and family? It is a pride for the Yoruba tribe to celebrate anything. But this event can now be a reference for the Nigerian people. Those in power may learn. Religious leaders should reflect and the populace has no option better than instituting a government of the people, for the people and by the people.