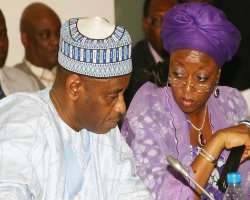 The aim of the fund is to build a base of savings for the benefit of future generations, enhance development of critical infrastructure and provide stabilization support for budgets in the country.

Minister of Finance, Mr. Olusegun Aganga told a public hearing on the Bill to Establish of Sovereign Investment Fund Agency that the National Economic Council comprising of federal and state governments had set aside the sum of $1 billion as seed fund domiciled in the Central Bank of Nigeria (CBN) to ensure for an effective take off.

The effort he added is with the view to reduce wastage of revenues accrued from endowed natural resources including oil and gas.

The initiative also enjoyed overwhelming support of the CBN as well as Attorney General of the Federation and Minister of Justice.

According to Aganga, 10 percent of the Sovereign Wealth Fund would be devoted for development of infrastructure at the state level and Federal Capital Territory (FCT); stabilization fund for sustenance of the economy as well as savings fund for future generation.

According to him the initiative was in adherence to the Santiago Principle, which is aimed at ensuring transparency and accountability in line with international best practices agreed to by the world's sovereign wealth funds and authorities. It will also ensure regular reporting to the public on investment decisions and the structural independence of the NSIA.

Aganga added that the move to establish the Sovereign Wealth Fund was applauded by over 18 countries and hundreds of investors and Fitch on the desirability of the fund.

However, the Minister assured that the fund would be managed by proven asset custodians.

"The fund provides the country with the opportunity to transform its economy and attract both local and international investment towards the provision of infrastructure as well as help in making Nigeria one of the leading economies in the world", he said.

The excess revenues accrued from sale of crude oil he explained would be remitted into the Sovereign Wealth Fund and shared by the three tiers of government when the price of crude oil falls for about four months.

Nonetheless, he noted that the sharing of excess crude account has faced serious criticism from Nigerians for lack of transparency and accountability.

Aganga however revealed that Nigeria, Iraq and Ecuador are the only oil producing countries that have not established the Sovereign Wealth Fund, while Algeria has about $56.7 billion set aside in its Sovereign Wealth Fund out of the $3 trillion accrued into the fund globally.

On the sharing of the fund he maintained that the money accrued into the fund would be shared based on the recommendations of the Governing Council and Board of the Sovereign Wealth Fund adding that the amount accrued into the account would be processed and published in national dailies.

Also speaking, Tunde Lemo, CBN deputy Governor noted that the Authority is expected to use both the initial and subsequent funds to set up the future generation fund, Nigeria infrastructure fund and stabilization fund with a minimum investment of 20 percent of the amount in each of the funds.

On its part, NLC called on the National Assembly to amend relevant sections of the 1999 Constitution, which could jeopardize the setting up of the fund and noted that the establishment of the Sovereign Wealth Fund was long overdue.

On his part, Ahmed Makarfi, Chairman Senate Committee on Finance stressed the need for clarity in the role of the National Assembly, just as he called for states’ input into the Sovereign Wealth Fund.