ACN Accuses PDP Of Intimidating Opposition Ahead Of April's Election 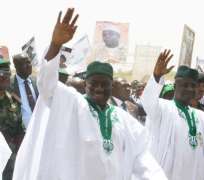 ABUJA, MARCH 09, (THEWILL) - The Action Congress of Nigeria (ACN) has accused the Peoples Democratic Party (PDP) of intolerance by mounting a well-orchestrated campaign of intimidation and harassment against the opposition, as part of efforts by the jittery ruling party to gain an unfair advantage.

In a statement issued in Lagos today by its National Publicity Secretary, Alhaji Lai Mohammed, the party also accused President Goodluck Jonathan of looking the other way while his party engages in a dirty and dangerous game to frustrate the opposition.

''On the campaign trail, President Jonathan says all the nice things about free and fair elections and one man one vote, but then he pretends not to notice when his party engages in actions that will not make the forthcoming polls free, fair and credible,'' it said.

ACN said the opposition has been systematically denied the opportunity of carrying outs its electioneering campaign unhindered, especially by state governments and the police turning down requests for venues to be used for such campaigns.

The party cited its own experience in Kebbi and Zamfara states, for example, to buttress its claim.

''In Kebbi, our request to use a certain venue was turned down because the authorities said the President will also use it a few days after our own rally, and that allowing us to use it will not give security agents enough time to comb the venue for bombs. We were subsequently shoved into an unsecured venue, as if it is alright for our candidates and supporters to be exposed to danger since they do not belong to the ruling party.

''In Zamfara, we made a request to use a certain venue on March 12th for our rally. But our request for a permit was turned down by the police on the flimsy excuse that the President will be coming to the same state March 13th. Anywhere the President is coming to campaign, no other party can campaign there until he has gone, so it will seem.

"Yet, the President keeps vowing that his administration will ensure that the forthcoming polls will be free and fair. He has forgotten that election is a process, and that for it to be credible, pre-election activities are as important as the events on the election day,'' it said.

''Tuesday's attack in Benue, in which gunmen fired on the convoy of ACN bigwigs going to receive PDP decampees, marks the second time in two days Young Alhaji will be attacked. The hoodlums who carried out the first attack were handed over to the police, but to date nothing has been heard.

''This, in the same country where a CPC candidate has already been charged with the blast that rocked a campaign rally of the PDP in Suleja, Niger State. The implication is that once any attack is against the PDP, it is wrong. But any attack against the opposition is fine,'' the party said.

ACN also cited the near crash of the plane carrying its vice presidential candidate, Mr. Fola Adeola in Bauchi on Tuesday

The argument that the airport has no perimeter fencing, hence it is susceptible to incidences of animals straying onto the tarmac, does not hold water. After all, the Bauchi airport authorities are aware that a plane was approaching the airport and could have cleared the tarmac. Would they offer the same lame explanation if it is the President's plane that was involved?

''All the pledges about organising free and fair elections in April will amount to nothing if the ruling party continues to intimidate the opposition, if it continues to use state resources and agencies, including the police, to muzzle and frustrate the opposition. We are documenting these anomalies and will present them to Nigerians in due course,'' the ACN party said.