Senate On PIB: We Can't Be Blackmailed; Suspends Consideration OF Bill 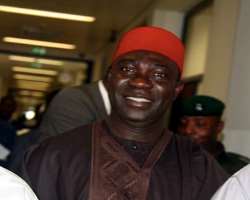 ABUJA, March 08, (THEWILL) - Deputy President of the Senate, Senator Ike Ekweremadu today warned that the Senate would not succumb to intimidation and blackmail by protesting 'charlatans' to pass the now contentious Petroleum Industry Bill (PIB).

Ekweremadu’s outburst was in response to protests by groups of protesters at the National Assembly following the delay in passing the PIB bill.

Meanwhile, hope for early passage of the bill dimmed, as the Senate has also shelved the consideration of the Bill on the excuse that senators need more time to go through the document. Interestingly, the Deputy Senate President who presided over the plenary had earlier said that the only snag in the consideration of the Bill was the exclusion of the signature of the Chairman of the Senate’s Gas Committee, Senator Osita Izunoso.

“We are responding to our sense of responsibility and not to any text messages. I hear that some charlatans were here yesterday (Monday) to protest the Bill. I know the amount of work we have put in the Bill in the life of this Senate, if Gas Committee Chairman, Senator Osita Izunoso can be included, by Tuesday, 15th March, we can look at the Bill.”

Most senators nonetheless supported the postponement of the consideration of the Bill, but basically on the premise that the Senate in session could not muster the number to consider such an important bill and also added that senators need time to go through the document.

Presenting the report earlier, the Chairman, Joint Senate Committee on Petroleum Industry Bill, Senator Lee Maeba said the principal objective of the Bill is “to enhance the exploration for petroleum in Nigeria and to promote petroleum production for the benefit of all Nigerians.”

The Bill he added; “provides that the management and allocation of petroleum resources and their derivatives in Nigeria shall be conducted strictly in accordance with the principles of good governance, transparency and sustainable development of Nigeria.”

According to him, when the PIB is passed into law it would provide a strong and virile regulatory framework for overall efficiency of the petroleum industry, adding that it would maximize the benefits of exploration of Nigeria’s petroleum resources through increase in government take.

He noted that it would stimulate economic growth and development through the availability of natural gas for the nation’s industrial development.

Reacting to the statement of Deputy Senate President, David Ugolor of the African Network for Environment and Economic Justice (ANEEJ), organizers of the protest to campaign for the passage of the Bill said Ekweremadu’s comment “is very disgraceful adding that, “it shows the kind of mindset of the person of the DSP).

“For Deputy Senate President to call civil society groups that came here yesterday (Monday) to protest without any violence charlatans is very disgraceful. The DSP’s comment is not acceptable because the groups were here to stage peaceful protest.

“The issue of non-inclusion of signature of gas committee is very disgraceful; the inability of the Senate to consider the report is a deliberate attempt to frustrate the good work done by the Senator Lee Meabe’s Committee.”