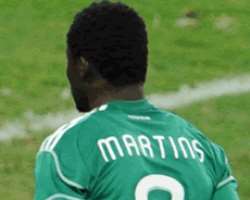 Obafemi Martins
Obafemi Martins' cup-winning feat with Birmingham City has been promptly rewarded with a recall by coach Samson Siasia. Martins has been overlooked by the Super Eagles since a disastrous outing at last year's World Cup in South Africa, but a top team source has now revealed that 'Obagoal' will be picked for this month's Nations Cup qualifier against Ethiopia.

However, this may depend on the availability of Turkey-based striker Emmanuel Emenike, who is currently nursing an injury.

'Siasia is seriously considering Martins for the match against Ethiopia particularly after his recent showing with Birmingham City in England,' a top team source said.

Martins, who made his Eagles debut seven years ago, was the hero when unfancied Birmingham City upset Arsenal 2-1 to win the Carling Cup at Wembley.

The 26-year-old striker came off the substitute bench to gladly capitalise on a mix-up in the Arsenal defence and slot home the winning goal a minute from fulltime.

Siasia though will axe Italy-based Michael Odibe in Thursday's press briefing after the much-hyped central defender failed to impress on his debut against Sierra Leone last month.

Adeleye was unavailable for the Sierra Leone friendly as a result of injury.

Israel-based goalkeepers Vincent Enyeama and Dele Aiyenugba will keep their places, but the third goalkeeper from the Nigeria Premier league could either be Sunday Rotimi or Chigozie Agbim of Warri Wolves should Bassey Akpan remain banned.

'The goalkeeper trainer, Ike Shorunmu, has been very impressed with the reflexes of Agbim, but he also rates the experience of Rotimi,' a team source further disclosed.