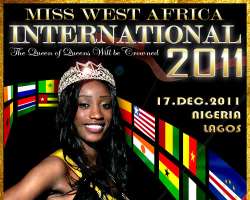 One more year of reign left for the International Beauty Queen of West Africa, Shireen Benjamin, and she has vowed to dedicate it to increasing the support of African fashion. Working along side the Miss West Africa event organisers, Shireen Benjamin has launched a campaign called "African Music for Fashion", in the process she will also be launching 'African Fashion Day' (www.africanfashionday.com) which will take place on the 6th August 2011, on the Saturday of the first week in every August. Shireen Benjamin said she is highly impressed at the continuous growth of the African music industry, but highly appalled that despite this growth you can sit in front of your TV set watching African music for an hour and hardly see an individual wearing an African attire, neither mentioning nor promoting the names of any African designers. Instead they use their voice and musical appeal to continue promoting the same designers that neglect our shops, models, magazines and even the musicians of Africa. "African fashion from all regions of Africa is beautiful and we can't wait for the people and media abroad to appreciate it before we become more confident with wearing it." - Shireen Benjamin

The 'African Music For Fashion' campaign is targeted at African musicians, record labels and music video directors due to the fact that our musicians are increasingly becoming icons within the African continent, even encouraging MTV to organize and MTV African Music Awards. And no matter how they feel they are representing themselves as individuals, being in the lime light of popular culture, there will always be a fraction of society that are influenced by their actions and words, Africans and non Africans alike. Shireen also believes African artists that chose to wear African will actually have a bigger impact on the international community than those that struggle to imitate the the western artists style. "People in the West, whether Africans abroad or other nations love West African music because it's refreshing and a break to their norm, it can only help an artist if they embrace a full on African identity, otherwise their presence is no different to what we have all seen for ages, suits, half naked woman and cars is so 90s. They will be doing themselves a double favour by making an attempt to stand out and also by contribute to an industry that will help Africa grow and also probably feed them back one way or the other. I don't believe there is any reason for them not to. We can not let our music loose control of our fashion and culture like the way hip hop did when it abandoned the urban fashion wear and the conscious elements that was once so popular" She says "Yousson Dour (Senegalese Singer) to date is one of the biggest West African artists singing at concerts worldwide and working with Wyclef Jean and he always stayed true to his fashion in videos and on stage."

But Shireen Benjamin also states that her campaign and public speeches will not only be directed at encouraging music artists to do so, but the public in general. She says "The artist are a means to the goal, and the goal is the society, the reason why this campaign targets artists is because despite politicians and their power, musicians have always been the most influential icons of every African/black community. So the change will be a lot faster even without the artist when we ourselves embrace our culture. Models, fashion show organisers and designers in Africa can not complain about the lack of support and growth in African fashion when they hardly have have one picture of them on any networking website wearing African attire on their facebook" she continues "There are extremely talented designers such as Deola Saego, Duro Olowu, Tiffany Amber and many more who are making some of the most amazing clothes, and even for those that want something more contemporary, there are always highly talented contemporary designers like Ozwald Boateng from Ghana, Samantha Cole and others. We are rich with creativity and we need to see these changes, we can't be exploiting the dream by doing fashion weeks and shows, if even the organizers don't wear it. We need to see these changes in our movies, in our music and even in our clubs. This is not a chance to point the finger, or play the blame game, even I myself have been a victim of aspiring to the western style, but this is a very important change that I am just adopting, because no one will bring this change for us, especially not Europe, and I think we should all work towards the day when you walk through the streets of Africa, even the popular cities, that we see a crowd flourishing with African attires."

Shireen Benjamins "African Music for Fashion" will be posted on all the Miss West Africa websites. She intends to use her international popularity and give back to Africa. Shireen who is currently the first African titled beauty queen to be featured twice in OK magazine, put together a shoot right before leaving to Atlanta for the Beffta USA using African fabrics to inspire and encourage the belief that there is African attire for all occassions. The shoot had onboard international reknowned fashion photographer Phil Antony, designs from Scissorhands Couture, Jessique Designs and was styled by MiNC Models and make up by Mutsumi. So far she has gained support from designers and fashion organizations such as Shadders (Ghanaian Fashion Website), Eki Orleans (UK fashion Brand), EMUA Fashions (Canadaian fashion brand), AdeBayo Jones (celebrity fashion designer from Nigeria), MiNC Models (UK fashion company, Da Viva fabrics (leading textile company) celebrities and musicians such as Asamoah Gyan (African's number 1 striker), K-man (leading Sierra Leonean artists), FiveFive (celebrity artists from Ghana), and will also be working with various organizations on the first attempt to increase public awareness and make the first African Fashion Day on the 6th of August 2011 an international success with a world wide impact. Shireen who will also be in Nigeria in December, also said she is looking forward to meeting her successor in December 2011 when the next Miss West Africa, now Miss West Africa International, will take place.