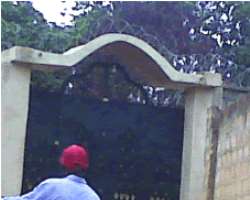 Entrance to the clinic after it was sealed off by NAPTIP

Until recently, the Ayodele Omosuyi Natural Clinic in Ugwuaku, Okigwe, Imo State, was believed to be the 'solution ground' for baby-seeking habituÃ©. But behind the high fenced walls, all manner of the absurd takes place, away from the prying eyes of the public and law enforcement agents.

Unknown to many, this was a hugely thriving baby factory, where women who pretend to be heavily pregnant deliver their 'babies.' But not without a price!

Depending on what a woman wants, twins go for about N1 million, male babies are sold for N500,000, while females are sold for between N350,000 and N450,000. Whichever child you desire, she collects cash and not cheque.

Behind the illicit baby trade is one Mrs. Ayodele Omosuyi, popularly known as Iyawo in the community. It is not difficult locating her 'clinic.' Anyone, especially the commercial motorcycle riders at the Okigwe junction along the Enugu-Port Harcourt Expressway, would readily take you to her rendezvous.

She is seen as lord in the community and nobody in the rural community of Ugwuaku dares cross her path. The police were believed to know about her activities, but apparently looked the other way until soldiers burst the ring last December when they raided the place with officials of the National Agency for Prohibition of Trafficking in Persons (NAPTIP).

Decayed human bodies that had turned into skeletons were among the things allegedly discovered during the raid. NAPTIP suspects that some of the children and even adults might have been used for rituals at the clinic.

During Sunday Sun checks at the village, a commercial motorcyclist told our reporter that the community does not know half of the things that go on in the village.

'It is a Mecca of sorts and people come here for very many different purposes.'

He alleged that people from far and near, vehicles of all shapes, sizes and brands, some marked with Federal Government number plates as well as other special numbers from different parts of the country visit the woman, whom he described as very powerful.

He narrated the story of a passenger he often carried to the clinic.

'One day she confessed to me that she was in trouble. She said her sister-in-law, who had been scheming for her to be chased away from the family due to her inability to have a baby, suddenly changed after she visited Iyawo.

'She said after taking the substance given to her she started noticing something growing in her womb and that her baby actually moved to the admiration of her sister-in-law and other members of her family. She, however, confessed that it was just that once; that nothing happened again until she visited Iyawo again.

'When it was nine months and time for her to be delivered of her baby, Iyawo had to postpone the delivery date by four months to enable her complete the N1 million fee she was charged for twins.'

How the bubble burst
NAPTIP explained how investigation into the child racketeering started. According to the agency, operatives of the State Security Services (SSS) had arrested some women who came to Enugu through the airport only to return days after with newborn babies. The women were handed over to the agency, where they revealed how the suspect (Mrs. Omosuyi) assisted them to get the babies.

NAPTIP revealed that Mrs. Omosuyi had agents that are paid for each pregnant girl brought to the clinic. The girls are paid between N70,000 and N90,000 after delivery, depending on the sex of the baby.

While girls who successfully deliver are given a token, those who lose their babies are reportedly forced to serve Mrs. Omosuyi for a long time. During this period, male adults were paid to impregnate the girls, who are not allowed to leave the clinic.

A woman from Switzerland, who is married to a Cameroonian, was also found at the clinic. She claimed that her sister had got her children through the same source.

Fake pregnancy
Investigation revealed that the suspect administers certain substance on her patients that form a sort of tumour in the womb of the 'expectant' mothers, making them believe they were pregnant. The women warned not to go to any hospital or undergo ultra-sound or any sort of scan as they could lose the 'pregnancy' or 'baby' in the process.

When it is time for 'delivery,' another substance is administered on the woman, which gives a false impression of labour. Part of the sex organ is cut as well as the growing tumour to discharge the necessary blood and make it look as though there was actual delivery. A baby is then sneaked in and made to cry. The woman is also made to believe she had been delivered of a baby.

Spirited defence
Recently, Iyawo attempted to whip up public sentiment when she appeared on a national television station and accused the soldiers and NAPTIP officials of various human right abuses.

She alleged that she was manhandled, raped and brutalised by the soldiers and NAPTIP officials during the raid.

She said she was pregnant and had a miscarriage in the process of her arrest and detention.

She also claimed to have discovered herbs that can make a barren woman pregnant and had successfully used it for years to assist women in dire need of babies.

Days later, a NAPTIP official appeared on the same television station to respond to the allegations. Head of the South-East zonal office of the agency, Ijeoma Okoronkwo, described Omosuyi as a notorious woman who harbours teenage girls, sell their babies at delivery and settle the young mothers with between N70,000 and N90,000, depending on the sex of the baby.

The NAPTIP official revealed that they took time to investigate the suspect and that some of her victims were ready to testify against her in court.

The agency said Mrs Omosuyi's clinic was one of the two major baby factories in the South East raided by the soldiers. The other involved one Nma in Abia State, who is being remanded at the Aba Prisons. Skeletons were reportedly found in both homes.

Trial
Last week, the second accused, Mrs. Ann Okafor, who is standing trial with Mrs. Omosuyi at an Enugu Federal High Court, failed in her attempt to regain custody of her three-month-old twins.

The court could not entertain the application on grounds that the motion was not properly filed.

Counsel to the second accused, Daniel Alumo, told our reporter that his team would go back and put their house in order to re-file their application for custody of the twins.

The trial judge, Justice Mohammed, was however, furious with the parties for going to the media when the matter was still in court and warned them to desist from speaking further to the press.

He advised the first accused (Mrs. Omosuyi), who claimed that the issue she took to the media bordered on abuse of her fundamental human rights, and to engage a lawyer to pursue such case in the court.