We got married at 12am because we didn’t want to have a big wedding –Adaeze, Joseph Yobo’s wife 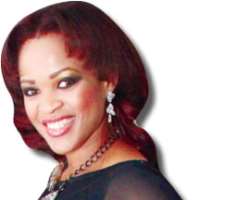 Adaeze Joseph-Yobo was the Most Beautiful Girl in Nigeria 2008. She got married to Super Eagles captain, Joseph Yobo, immediately after her reign. In this interview with Ada Onyema, she speaks on the controversy surrounding hermarriage, motherhood and sundry issues How is it like being a mother?

It is beautiful. I'm actually rushing home to my son because he is so used to me. It is nothing that I expected to be really difficult. I'm used to it now and I'm loving every bit of it.

How did you feel at the early stage of the pregnancy?

The early stage was very annoying. I didn't know what was going on; my movements and moods totally changed. To me, it's the most difficult time but after a while, I got used to it. The mood swing was the annoying part.

What is the comparison between now and when you were a beauty queen?

There is no comparison whatever. It is like one to 10 and moreover, I'm more exposed now. I respect my family and my mum. It is not easy to have two babies at home; my husband and my child. So, it is very difficult. You have to be understanding, take it step by step. It is so much fun to be able to have two people who respect me and expect me to be not necessarily like his mother because my mother always expect me to do my motherly duties. Now I take care of my son and my husband and I'm surprised at myself that I'm not frustrated. It is just God's grace and I'm loving every bit of it.

How does it feel getting married to a footballer?

It is not bad as I thought it would be. There are so many events they go for that we have to go together. It is something very beautiful and I never expected it to be fun because everyone had always said you had to be careful of this and that; you can't get married to this kind of people, but it's been fun and I have no fear about the marriage.

Going into marriage at your age is always associated with some challenges. What are some of the challenges you went through?

I did not experience anything; I just fell in love with my husband and I got married to him. I give him my heart so I have nothing to lose. Also before then, no one had asked for my hand in marriage. I know God was behind it. So, there was no fear. Even when I got into the marriage, there were no challenges apart from the fact that I got pregnant immediately.

Definitely, school is never a problem. I was at the New York Film Academy before I got pregnant. I have my diploma, so anytime I'm ready to go back, I will go back and start from where I stopped.

Do you always travel with your husband?

Internationally yes, but I don't check in where he plays. I just leave him because it's just two days, but now that I'm in Nigeria, I came with him for the match they had and when he left, I decided to stay back with my mum for a while.

We have had several celebrity marriages hitting the rocks. Was it one of the things you considered before getting married to Yobo?

I never looked in that direction maybe because I was naive. I never had that fear; my husband was ready to get married and we did.

Also, they call you names like gold digger because you married a footballer. Are you really one?

Yes, I know about all that. Everyone will always have something to say. What is not good about him and why can't people say I got married to him because he has a good body or that he has a good sense of humour? Why would it have to be on the negative side? Why should I say yes to him because he is wealthy? That was the least thing on my mind. I don't come from a poor home and I never lacked anything in my life. Funny enough, we never knew each other before we met; it was along the line that we started talking. I knew who Joseph Yobo was, but I couldn't place the face with the name. We know how we met; what people say doesn't matter. I can be a gold digger, whatever they want to call me.

Does it not bother you?

It doesn't bother me. People who say that kind of thing have nothing to say. Having been in the limelight for awhile and at home taking care of my family and people are talking about me being a gold digger, that is their problem. It is just a stepping stone to another level in my life. So, if they want to keep talking about that, they should go ahead, it is not important. I don't know why they won't mind their business, they just sit at home and gossip about others.

What time do I even have to know if he was actually that wealthy or not. I knew nothing about him. Everything went so fast, he was ready to settle down; he proposed and I accepted.

Oh, that could be the reason then?

But we dated for awhile though not that long and before I knew it, he was ready to get married to me, ready to see my family and that was it. Quite alright, it was like a movie, but they have their mind to think whatever they want. I just know that we're the two people involved in it, so, I don't owe anybody any explanation. With or without the money, I'm still going to love him and he is going to love me. By God's grace, we will stand anything that comes our way.

So, how did you meet?

We met through a friend; we started chatting, and before I knew it, we got closer. When you find your man everything falls in place. I just dropped the crown and was ready to go into the world; because when I had the crown, my movements was restricted and that was the time I wasn't even thinking about marriage. I was thinking about which school to go to, use my platform to do other things, go into whatever talent I want to go into.

He proposed at the Heathrow Airport. I was in London and he came over and gave me an engagement ring there, but before then, when we met in Nigeria, he gave me a promise ring. I broke the news to my mum and we started planning for the wedding because there was no time. I got pregnant and we had to hasten everything.

So, you wedded at midnight because of the pregnancy?

We learnt your pastor advised against a big wedding.

It is our private life. We had already known that there was going to be a lot of people with bad mouth and that a quiet wedding will keep them away from our family. I just wanted to have a quiet wedding between me, my husband and God. I never imagined having my baby before my wedding; how would that look like? He wanted a partner, companionship and he wanted me. I don't know how it happened. I'm as shocked as everyone, but it happened. My eyes were wide open when I got pregnant; and now that it has happened, he is my husband.

Another story had it that you are a home breaker by snatching Yobo from another woman.

I don't know about that part of him being in a relationship. All I knew was someone called my mum from Europe to say they used to see him with so many women. As a human being, he would get angry, but I tried to let him know that I didn't really care. They are trying to make me angry and I'm not angry; why would you be? Whatever they say, I still love him. If he was in a relationship, which he said he was not, and after a while, he proposed to me, that does not make me a marriage or relationship breaker because he was not married. We're married now; he has a family and a companion. I don't see any reason why I should go to court over that matter.

Of all the men in the whole world, why do you love Joseph Yobo?

I don't know; I can't explain it. Even when I walked into the marriage, my friends were asking me, 'How can you stay with a man for the rest of your life?' For now, I just closed my mind from any guy; any man I see is like a woman to me now. My man is the only man in my life and my husband is everything to me. I don't know how it happened but after God, he is the next person in my life. I fell in love with him; it is not as if I was lost in love because I'm still in love with him. Every single day I have a reason to love him the more, though we're not perfect, we are still learning. I think we were meant for each other because of how it happened and everything surrounding it. No matter how confused people might be, I love him.

My growing up was fun. I was very close to my dad. I grew up in Anambra State and I went to Redemption Primary School, Onitsha. I was at Vivian Fowler Memorial College, Lagos, for my secondary school and went back to Enugu for my senior secondary school. After this, I went for a diploma in law at the University of Abuja from where I went for the MBGN and I won.

What is your definition of style?

Style is feeling comfortable in what you wear without feeling sorry for it. Style is not just what you wear, it is the way you walk, talk, everything about you. For me, style is my shoe. I pick my shoes before I pick my clothes.