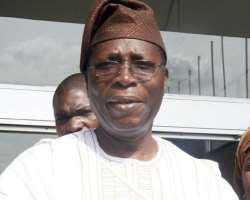 Justice Abdul Kafarati of a Federal High Court in Abuja made the declaration in a ruling earlier today.

The ruling makes the Obasanjo led faction the authentic executive of the PDP in Ogun State.

The Ogun State Governor led faction and the Obasanjo led GROUP have been engaged in a fierce battle over the control of the state PDP after both factions conducted congresses to choose candidates for the poll.

The Daniel group has however filed a notice of appeal at the Court of Appeal.