NO NEW MINIMUM WAGE, NO ELECTION 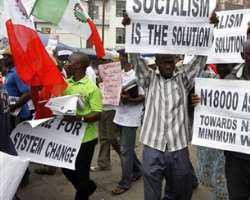 LAGOS - THE struggle for the implementation of N18,000 new minimum wage, yesterday, took frightening  dimension as 1,992 leaders of the Nigeria Labour Congress, NLC, in all parts of the country and all sectors of the nation's economy, resolved that Labour and its allies in the civil society groups would make the conduct of April elections impossible without the implementation of the new minimum wage by all tiers of government.

This came as the House of Representatives, yesterday, passed the Bill for an Act to amend the National Minimum Wage Act to compel employers of labour to pay every employee not less than N18, 000 per month.

Debating the NLC Secretariat's report on the minimum wage as well as reacting to statement credited to the Chairman of Governors' Forum, Dr. Bukola Saraki, of Kwara State that many state governments would not be able to pay the new wage, delegates to the ongoing 10th NLC  national congress, vowed to frustrate any attempt to hold the April polls without implementation of the new wage.

Contributors to the report of the General Secretary of NLC, Comrade John Odah, were unanimous that Congress should make the demand for the implementation of the new minimum wage a pre-condition for industrial peace to hold the elections.

NLC strike over minimum wage.
The Secretariat report had detailed the journey so far and how a Presidential Tripartite Committee headed by retired Justice Alfa Belgore recommended the minimum wage over a year ago and the difficulties being encountered. It then asked the delegates to discuss it and give further directives.

Part of the report read: 'At the moment, the bill to legalise the wage has been forwarded to both Houses of the legislature and in a recent visit by the Central Working Committee of Congress led by Comrade President to the leadership of the House of Representatives, we were assured by the Deputy Speaker who led the other principal officers of the House to receive us that the bill was going to receive accelerated passage.

Indeed, as at the time of preparing this report, the Bill had been passed by the Senate while it has passed its second reading at the House of Representatives.  We invite Congress-in-session to discuss the matter and give further directives.'

NLC President, Comrade Abdulwaheed Omar, who presided over the meeting after listening  to contributions from delegates, said workers were becoming very restive over the delay and uncomplimentary remarks from political office holders and politicians.

The NLC President then declared: 'It is resolved.'
Reacting to a statement by the Kwara State Governor, Bukola Saraki, that many states will not be able to pay the N18,000 minimum wage, Lagos lawyer, Mr Fred Agbaje said: 'The governors have no option but to pay the money approved by the National Assembly as minimum wage for Nigerian workers. Their refusal to pay the amount can now empower any aggrieved workers to go to court to seek redress and challenge the nonpayment of the N18,000.

'If any state fails in that regard, it has violated an existing law. Meanwhile, what happens to the jumbo pay being earned by the political office holders? They have to cut their earnings to accommodate the payment of the minimum wage. However, if any of the state refuses to pay, the workers must go to court without delay. For the states, the alternative for them is to embark on aggressive internal revenue generation. All of them must go and look for the money and pay without delay.'

Mr. Bamidele Aturu said: 'The statement shows the level of lack of respect for the workers by these governors. It is very unfortunate that they are talking about disparity about what they earned as states. They did not talk or complain when all of them earned same salaries. It is an act of wickedness in a nation where lawmakers or politicians earn big salaries. I have to believe that what Governor Saraki said was misquoted. The money is there for them to pay. The statement is unacceptable, illegal, null and void. The NLC can go to court to challenge that illegality, since it has become the Act of the National Assembly.

'I am sure they were part of the meetings and the public debate leading to this amount. They also intervened when the workers went on strike to protest the increment of their salary. The money is there, they have to pay.'

Reps pass Minimum Wage Bill
Meantime, the House of Representatives, yesterday, passed the Bill for an Act to amend the National Minimum Wage Act to compel employers of labour to pay every employee not less than N18, 000 per month.

Deputy Speaker, Usman Bayero Nafada, presided over plenary during the consideration of the report of the Joint Committee on Labour, Employment and Productivity and Finance on the Bill.

One of the highlights of the Bill, is that any employer who failed to pay the minimum wage shall be deemed to have contravened the law and fined N20,000.

The House had gone into the Committee of the Whole to do a clause-by-clause consideration of the report. The version passed by the House, is expected to be transmitted to the Senate for harmonisation before being forwarded to the President for assent.

Besides, the House also passed a Bill to for an Act to establish the Nigerian Intelligence Agency, NIA, and State Security Service, SSS, Pensions Board to handle pension matters for personnel of the Agency and Service.

The Bill was consequently referred to the House Committee on Pension matters for further legislative action.