THE JOKER READY FOR ANOTHER OUTING 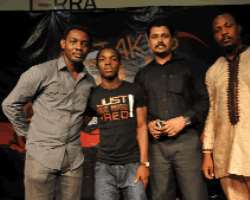 The Joker
Following the huge success recorded with its maiden edition 'The Joker at Terra' is poised for another riveting outing at Terra Kulture, Victoria Island, Lagos. Peekaboo Global Consult, organizers of the monthly comedy/music show, recently announced that true to its promise, it will hold the talent hunt show on Friday, March 4.

He said Nigeria is a nation blessed with abundant entertainment talents especially in the field of comedy. Comedy, he said, was one of the aspects of entertainment that is fast gaining ground. Popular gospel act, Kefee also featured in the February edition of the show, which incidentally was her birthday. It afforded the audience the opportunity to ask her any question of their choice. After singing a happy birthday song for the artiste, she took the hot seat and later performed three of her songs including the hit banger, Kokoroko.

'We are capitalizing on the successes recorded in the first edition of the show to bring out something better this time around. That is why we went the extra mile to put together what can safely be termed the best team in the comedy industry today. The comedians who will be featured next month have a very good measure of exposure in the industry and we hope that our guests will have a feel of what true comedy is,' posited Abuda. He further added that the idea behind harnessing greenhorns in the comedy industry was borne out of the need to create continuity. 'There might come a time when the veteran comedians will see the need to take a break.

It is talents like these that the mantle of the industry will fall on. In line with this, we can confidently say that the rush for the forms is on. At the previous edition, after tough stand off on stage, the contesting comedy acts were pruned down to three, X-Sod Brown, Memory Card and Lucky Child. However, Memory Card stole the hearts of the audience with a punch line about a preacher man who mistook alcohol for water. Following his victory, the comedian was presented with a cash prize of N50, 000. Abuda further revealed that the monthly event, which is currently supported by Terra Kulture, AY TV, Milan Juice, HP, and Smoke House, will invariably translate into a mini 'Industry Nite' as a gathering of young professionals and entrepreneurs from various industries. Comedy acts who have confirmed their attendance for the second edition include, Ushbebe, Elenu, Seyi Law, Ajibade, Mc Erem and winner of the maiden edition of the competition, Memory Card.