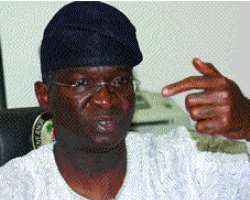 Speaking at the party's presidential campaign rally at the Tafawa Balewa Square, Lagos, Bello accused the duo of misapplying the state's revenue.

The PDP Acting National Chairman who spoke in the presence of President Jonathan, his vice, Namadi Sambo, ex-president Obasanjo among others said Tinubu and Fashola lack administrative credentials to lead a state like Lagos.

Bello accused them of being traitors and businessmen on the corridors of power.

Bello also came down heavily on the tax regime of the state government, saying it was killing businesses and promoting unemployment.

Specifically, he said many business concerns were either dead or moving out of the state to other areas.

Consequently, he called on the people of the state to vote the party's governorship candidate, Dr. Ade Dosunmu whom he described as having the experience to run the state.

He therefore, said the Federal Government was urgently looking into how to address the infrastructure decay in the state.

According to him, he felt sad each time he used the International Airport Road, saying its state was saddening.

That, he said, was the reason why the Federal Government was taking a holistic look at the infrastructure in order to upgrade them.

Jonathan said the effort would involve the private sector and the state government to achieve desired effect.

In a similar vein, ex-president Olusegun Obasanjo said the PDP would no longer tolerate a situation where the party was robbed of victory.

The former president who said that through a Yoruba song to the admiration of party members was apparently contesting ACN's victory in the state.

Congratulating Jonathan in advance, he said he was convinced that the president would win the coming elections, as ex-presid