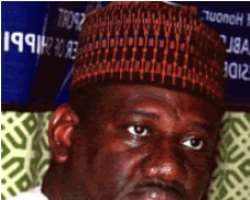 •Agric Minister, Mohammed
Traducers of the Managing Director of Nigeria Railway Corporation Mr Adeseye Sijuade insist that large scale financial mess is brewing at the Corporation where the boss has allegedly pre-qualified companies with dubious and incomplete documents for contracts worth more than 100 billion Naira. But authorities at the corporation say the allegation is stale and had long been investigated and found to be baseless.

However in a protest letter to the Honourable Minister of Transport made available to Daily Sun, some 'concerned Railway men' say most of the 13 companies pre-qualified by the boss for prospective contracts in the corporation fall far below requisite standards in experience and capital base.

They insist that the companies have been penciled down with the obvious intent of faulting them under due process in order to pave way for the few qualified ones allegedly linked to top echelon and their higher accomplices outside the corporation.

One of the firms [name withheld by us], highly favoured by the authorities, is said to have a paltry share capital of N250,000[two hundred and fifty thousand naira only] yet is short listed to be awarded a contract worth 30 billion Naira. To make matters worse, the said firm has not made annual returns to the appropriate authorities since 2003 and had actually submitted fake Tax clearance certificate for the bid.

In a letter addressed to the Managing Director of NRC dated June 29, 2010 with Reference number GWIT\83\VOL.11\197 signed by one Bawa S.S, Tax Controller, the Federal Inland Revenue Service [FIRS] said the tax clearance certificate attached by the said company 'was not issued from this office and is suspected to be fake'.

Even the bank Bank Gaurantee for bid security had been denied by the commercial bank which allegedly issued same. The firm is an estate developer with experience in building construction and non-whatsoever in Railway Track Rehabilitation or Railway projects. The petitioners insist that the company is standing in good stead for the job because it has links to the authorities in the corporation and even highly placed people at the presidency.

Another firm, said to enjoy a similar status with the one above, has a share capital of N10 million Naira but has been put forward for a job worth N35.5 billion. The company, according to the document in possession of Daily Sun, may have been registered for the sole purpose of doing the NRC job given that it had never executed any job in the past and had no account with the bank which allegedly gave it Bank Guarantee as at May 26th 2010 when the contract bid opened.

The company only opened an account with the bank on June 16th 2010 after it had entered the contract bid. The evident implication, according to the protest letter, is that the bid security which ought to be a condition precedent to the contact bid, was brought only after the bid had been submitted. Investigations also showed that signatories to the company's account bear names strikingly similar to that of a top staff of the Nigeria Railway Corporation.

Another company is being put down for a 30 or 40 billion Naira job when its share capital is below two hundred million. It also submitted Tax certificate that expired six months before the bid and is yet to submit a current one. The irregularities in the three companies above are said to run through most of the other firms.

When Daily Sun got in touch with the Corporation they said the matter is stale and had, indeed been investigated and found to be baseless, which is why the Managing Director had been acquitted of any wrong doing by the EFCC. Assistant Director Corporate Affairs Mr Ndakoju dissuaded Daily Sun from further investigations, since the matter has been laid to rest.

Indeed supporters of the Managing Director say the know the source of the attacks and wondered why a big deal is being made of a contrsct that had not yet been awarded, for which government had not expended any funds.

Daily Sun learnt that ssome unhappy members of the board, who jave consistently kicked against the appontment of Mr Adeseye Sijuade, have followed all his actions with skepticism. But one of them told this newspaper that they had good reason to do so especially given that a 12 billion Naira contract had been awarded to a company whose owners are said to have links with the top echelon of the corporation in circumstances that seem to fall short of due process.