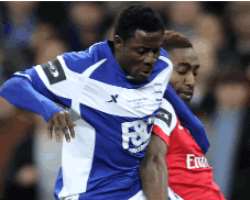 •Martins
A last minute strike from Obafemi Martins secured a League Cup win for Birmingham City as it beat Arsenal 2-1 at Wembley. Birmingham had taken the lead through Nikola Zigic in the first half but an acrobatic strike from Robin Van Persie levelled the game before a mistake from Laurent Koscielny and goalkeeper Wojciech Szczesny gave the ball to Martins who won the game for Alex McLeish's men.

Arsenal was rocked by injuries to key men, Cesc Fabregas and Theo Walcott, last weekend and both men were unavailable for Arsene Wenger as the Gunners went in search of their first piece of silverware in six years.

Tomas Rosicky and Andrey Arshavin were called into the starting line-up in place of the injured duo, and Laurent Koscielny was preferred in central defence ahead of Sebastien Squillaci. That meant three changes to the Gunners line-up from their semi-final win over Ipswich Town with Alex Song, Samir Nasri and Rosicky in for Fabregas, Denilson and Bendtner.

Alex McLeish made two changes from the semi-final second leg win over West Ham with Keith Fahey and Nikola Zigic named in the starting line-up in place of Matt Derbyshire and Cameron Jerome. Birmingham recalled Sebastian Larsson, Craig Gardner, Ben Foster and Zigic to the starting line-up after it was rested for last weekend's FA Cup victory over Sheffield Wednesday.

The game had its first moment of controversy after just the three minutes when Zigic controlled a pass on his chest before playing in Lee Bowyer behind the Arsenal defence. He took the ball past Wojciech Szczesny and was brought down by the young goalkeeper but rather than a penalty being awarded Arsenal was saved by the assistant referee, who flagged for offside. However, replays showed the midfielder was actually being played onside by Gael Clichy and Szczesny breathed a sigh of relief as he could have given away a penalty and would probably have been sent off.

Eight minutes into the game, Arsenal had its first chance and it fell to Arshavin, who was denied by a good save from Foster. Nasri began the move drifting inside from the right wing before disguising a pass into the Russian, he spun away from Martin Jiranek but was saved by the legs of the Birmingham keeper. Arsenal was beginning to exert some pressure on the Birmingham defence and a minute later it twice went close through Johan Djourou. Both chances came from corners and the defender was able to lose his marker but was unable to direct either chance on target.

Both sides began to trade possession and clear cut chances were at a premium but all that changed in the 28th minute when Birmingham opened the scoring through Zigic. The opportunity came from a Sebastian Larsson corner, it was headed towards goal by Roger Johnson and flicked into the net by the unmarked Serbian striker in front of Szczesny.

Understandably this shocked Arsenal to life and straight from restart it came close to getting itself back into the match. A good run by Bacary Sagna down the right down ended with a dangerous cross finding the head of Van Persie but his header just curled away from goal.

Six minutes after opening the scoring, Zigic should have had his second goal of the game after finding himself one-on-one with Szczesny. The Serbian won an initial header and found Gardner on the edge of the penalty area, the midfielder was challenged by two defenders but the ball bobbled its way back to Zigic but before he could poke the ball into the net Szczesny had closed him down and saved well with his body.

And Birmingham was made to rue that missed chance in the 39th minute as Arsenal levelled the score with a sensational goal from Van Persie. A neat move by Arsenal began with Arshavin who set up Jack Wilshere but his left foot shot crashed against the crossbar from the edge of the penalty area, the loose ball fell to Arshavin who beat two defenders before chipping a cross into the middle of the penalty area where Van Persie got in front of his marker and acrobatically volleyed the ball into the far corner from 7 yards.

In the closing seconds of the half, Arsenal came close to taking the lead through Samir Nasri but the Frenchman's swerving 25 yard strike was palmed away by Foster and both sides went into the break level. Arsenal began the second half in confident mood and eager to get ahead in the game, and they came very close three minutes into the half through Rosicky.