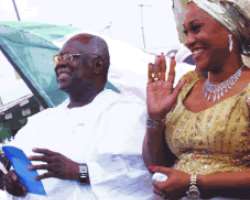 The CNPP in a press statement issued in Abuja described the celebration as obscene of a Nigerian convicted of established crimes as obscene and most appalling at the same time called to question the President Goodluck Jonathan's much publicized zero tolerance of corruption and anti-graft crusade.

The statement which was signed by the National Publicity Secretary of CNPP Mr. Osita Okechukwu noted as totally uncalled for the action of President Jonathan who against best ethical tradition delegated the Minister of Defence, Prince Adetokunbo Kayode to represent him at the obscene celebration.

According to Okechukwu; 'President Jonathan from all intents and purposes by this act has failed woefully to defend the Constitution of the Federal Republic of Nigeria, a Constitution which frowns against corruption, failed to show leadership and questioned the sincerity of his commitment to war against corruption.

'We are appalled that the president of our dear country can openly without prejudice to his oath of office, celebrate a man who was convicted for 163 count criminal charges bordering on abuse of public trust, contract splitting and financial misappropriation to the tune of N100 billion.'

The Confluence of opposition political parties further questioned the rationale, lessons or legacies some privileged people in the country want to bequeath to future generations with the celebration of a man from prison who was convicted not for political charges but criminal charges?

The CNPP however praised the Venerable Tayo Aduloju of Catheral Church of Christ, Marina Lagos, whom it noted admonished Chief Bode George and his fellow travelers when he pointedly told them that; 'Nigeria has huge resources and nothing to show for it. He that is greedy of gain, trouble his own house, but he that hates gifts shall live.'