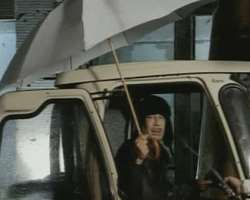 EMBATTLED LIBYAN PRESIDENT, COLONEL MUAMMAR GADHAFI DURING ONE OF HIS BIZARRE APPEARANCES ON TELEVISION FOLLOWING PROTESTS FOR HIM TO STEP DOWN FROM POWER.
Listen to article

ABUJA, Feb 27, (THEWILL) - The Socio-Economic Rights and Accountability Project (SERAP) has sent an open letter to President Obiang Nguema Mbasogo, Chairperson of the African Union, urging him to use his leadership to ensure that the AU Assembly “urgently exercise its right under Article 4 of the Constitutive Act to intervene to stop the ongoing massive and outrageous human rights abuses in Libya.”

In the letter dated 27 February 2011 and signed by Solicitor to SERAP, Mr. Femi Falana, the group said that, “We are seriously concerned about the continuing inaction of the AU leadership in the face of the well documented crimes against humanity and possible genocide being committed against innocent and unarmed protesters by the Libyan government.

“Tens of thousands have been killed, and several injured. Properties have been destroyed and as we write the government is still using dangerous military weapons against its own people,” the group added.

The group also said that, “The AU has to send a powerful message to the rest of the region and the entire international community that leaders and governments who wilfully kill and murder and committing other outrageous human rights abuses against their own citizens will be held to account for their actions.

“Playing politics or remaining silent when the citizens of Libya are being murdered by their own government will undermine the credibility and authority of the AU and its many institutions. Africans need to see that the AU is capable and can show the political will to genuinely implement its own Constitutive Act. The AU should not fail the people of Africa and the people of Libya, the group further added.

According to the group, “The AU has committed itself to promote peace and security of the continent. The AU has a fundamental duty to assist a people in danger, such as in the case of the suffering Libyans in the hands of their own government. The old-fashioned theory of State sovereignty, used to fend off criticism of massacres, cannot stand under the terms of the AU Constitutive Act.”

The group said: “More importantly in the context of the current and ongoing unlawful killings and crimes against humanity being committed against the Libyan people by the government in Tripoli, the Constitutive Act of the AU provides in Article 4 for the right of the Union, to intervene in a member State. Article 4 says the AU Assembly will intervene in respect of grave circumstances, namely: war crimes, genocide and crimes against humanity.

“The AU can do this without authorization from the UN Security Council, if its action as in the Libyan case is for the purpose of preventing or putting to a halt gross and massive violations of human rights or international humanitarian law,” it said.

The group also said that, “It is clear that the fundamental basis for cooperation under the new institutional framework of the AU is that all member States of the Union have to observe certain fundamental values and standards, including respect for human rights, democratic governance. The AU under its Constitutive Act has promised Africans that when a member state like Libya fails to observe those standards, such member states will face political and economic sanctions.

“We know that the decision by the Assembly of Heads of State and Government of the OAU who adopted the Constitutive Act of the African Union to incorporate the right of intervention in that Act stemmed from concern about the OAU’s failure to intervene in order to stop the gross and massive human rights violations witnessed in Africa in the past, such as the excesses of Idi Amin in Uganda and Bokassa in the Central African Republic in the 1970s and the genocide in Rwanda in 1994,” the group added.

SERAP said, “But unless the AU act now and intervene to stop the killing on the streets of Libya, its ability to prevent or halt the kind of abuses cited above will be severely undermined.”

urgently seek an extraordinary session of the African Union Assembly to discuss intervention in Libya to stop the ongoing massive human rights abuses against the Libyan people, refer the situation in Libya to the International Criminal Court and support the initiatives at the UN Security Council in this respect.