DIABETES AND THE SKIN 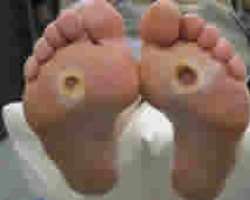 As the duration of diabetes increases, skin manifestations also become evident as a result of damage to structures that support the skin called collagen and the blood vessels that supply blood to the skin. People with Type 2 diabetes tend to have a lot of skin infections whereas people with Type 1 diabetes tend to develop a skin condition called vitiligo, in which there is loss of skin pigmentation.

They are associated with decreased sensitivity of the body to the action of insulin and are also thought to be associated with high blood cholesterol levels and increased risk of having a stroke or heart attack. Removal of the skin tags is not always necessary.

Darkening of the back of the neck, the armpits, the groin and the umbilicus can be seen in people with Type 2 diabetes. It may also be seen in people with cancers. It is commonly seen in people with diabetes who are overweight or obese and is thought to be due to resistance to the action of insulin. It tends to disappear as people lose some weight. Ointments that contain salicylic acid or retinoic acid are used to treat with some good effect.

The commonest skin manifestations by far in people with diabetes are skin infections which are seen in nearly one of every two persons with diabetes. This is particularly common in those with poor sugar control. Fungal infections are common in the genital areas and manifest as severe itching. This can also be seen in other areas of the body.

Fungal infections called Athlete's foot are also common in the region in between the toes which if not quickly taken care of may lead to grave consequences for such a foot. It manifests as peeling off of skin and itching in between the toes. Combination of antifungal cream and tablets has proven very useful in treatment, in addition to keeping the affected area dry.

Bacterial infections leading to boils in various parts of the body are also very common. This can be severe and widespread and can indeed be the first manifestation of diabetes. Adequate blood sugar control, coupled with use of antibiotics is quite beneficial in treatment of boils. One of the most feared infections in people with diabetes is infection of the outer ear as this infection can quickly spread to the brain and be rapidly fatal.

In cases like this, prompt hospital admission, antibiotic injections and surgical interventions are imperative. Skin reactions to insulin injections are rarely seen nowadays as the various types of insulin in use are highly purified ones. However, there can still be redness and itching at injection sites soon after the injection or an itchy swelling may develop days after at the injection site.

The skin around the injection site may also become depressed or elevated as the fat cells in that region react to the insulin. This can be prevented by rotating the insulin injection sites. Commonly used anti-diabetic tablets like Glibenclamide can lead to very many skin manifestations that will only subside when the tablets are stopped. These manifestations include goose pimple-like eruptions on the skin which may be itchy, redness on the skin, and in severe cases peeling off of the skin. Some of these drugs can also lead to swelling of the legs.

Another common manifestation of diabetes in the skin is long delay in healing of wounds.