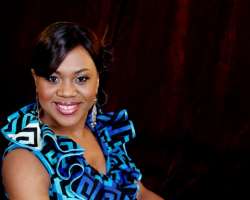 Do you still sing?
Yes I do. I still have my band

Some of your colleagues in the film industry have been releasing albums. Do you intend to toe that line?
Well, it was part of the plan. Some years back, my late husband and I actually had an album for our band, Synergy. Of course when he died a lot of things just slowed down. So I didn't pursue it so much because I wanted to stabilise some other areas of my life. I've about two songs as my own singles but I'm not ready and that's the truth. I'm not going to rush into it because every other person is doing it. It has to be a choice that I would make because I'm ready to do it. For me, singing for 15 years does not mean that I feel that my voice is perfect enough to go into the studio immediately. So I'm at that phase where I'm still doing a lot of voice training. So before I even say I want to do an album, everything has to be in place because I'm not about to do the album and start looking for who will buy it. I don't want my music to be like that. I want to have a proper record label on ground that I can see and verify that 'okay these people are good'. They can take care of your music. They would have people that would do the production for you. They would have people that would get you shows.' For acting you would hustle then to do music you will come and hustle again.

Obviously you actresses are making a lot of money?
That is the biggest lie ever. That is the biggest lie they have been selling through the media for a long time. There is nobody that would come and tell you 'oh in the movie industry, I'm extremely well paid. That is a big lie because even the producers don't even have enough money most of the time to cover their costs let alone being able to pay actors very well. That's why people are bad-mouthing a lot of us that 'oh some of you move from set to set'. And my question is why not. A lot of people are not like me. I have other strings of income. A lot of people do only acting. So if you pay them and not that much, how long would they have to use the money before they get another one? Look at all the old actors that are there. They are very broke. Sixty percent of most of our actors that were really popular, they all have one illness or the other. They are begging people to help them. If they have that much money saved up they won't be in the position they are today.

But actresses like Omotola and Genevieve seem to be rich. Some people are lucky they are married to people that are wealthy. Some people are lucky to get endorsement deals out there. But if you think that whatever we are doing now is based on what we earn from movies, it's a big lie. I'm lucky that I've discovered the other things that I can do and do well. So I'm able to multi-task, if not I can't maintain a particular standard of living or quality of life. So don't let anybody deceive you that home video pays so much. That's a lie.

Give me a figure of what the industry is paying now.
Oh it's even worse now. I might not want to do that because of my colleagues but before the ban they had some time ago, it was not great, but it was something at least that you can just use to pay off some bills. But now it's terrible. So a lot of people are doing partnerships, barter deals and other things – use me in your film, I'll do it for free and when it's out , we split the proceed or I do film for you and you will do my own because everybody has become producers all of a sudden. That's how a lot of us survive.

As a celebrity, do you enjoy being famous?
No, because I'm a very simple person. Unfortunately for me, you can't separate the nature of the job from the glamorous life of a celebrity. Most of the time, I want to be very simple. I want to walk into a place and live a normal life. But I cannot live a normal life because of the nature of my job. It's not fun. I can't live a normal life. I wish I could. I miss my life. So when people ask me 'would you do this again?' I will but not like this, very differently. I will live my life slightly different from this. Anything that I can do to reduce all the attention, I would because I'm a family person and I like to see myself as a mother who wants to care for her children. You see, in developed parts of the world, you would find that being a celebrity comes with its ups and downs. But most of the time, even with negative publicity, they also celebrate their stars to the point that people would do anything to see them. But here, if you are not friends with the media, if you don't do something to appease them, you're nothing. They would want to really mess you up. Everything is controversy. Everything is sensational for them.

But some of the reports are true
No, no, no. If you ask me, it's only five percent of journalists in this country thatdo investigative journalism. Most of the time they write crap. They don't know anything about you. They come up with all sorts of things. They don't even get the true version of anything and they just print it to get a reaction.

But you can always sue such media
Sue a magazine in this country? Let's be realistic here. Let's think of the judicial system in our country and see how many years it will take you to sue one paper. And then the others would now pounce on the story of what's going on. You would now give more credibility to the paper and make it more popular. Then you spending money to battle them in court and they are still making money. So they would keep riding on that story. If our society, our judiciary make sense there are some things you would not tolerate. For me I just move on and do more positive things.

Among the negative things that have been written about you, which ones are false?
They are all false.

Give me an example
I can't give you any example. The truth is that they don't know me. A lot of people don't know me because I'm not easily accessible to them. They don't know how I live. They've never even seen my children before. They've called me all sorts of name. 'Oh she's a bad mother'.

What aspect of being a celebrity do you like?
Well, I like the appreciation from people and their encouragement. A lot of people pray for me. That's the only thing that I enjoy there. Every other thing, I don't.

With your busy schedule, how do you find time for your children?
My children work with me when they are not in school. They give me ideas. They are 11 and eight years old and they are so creative. So I spend most of my time with them. They don't stress me and they are very understanding.

Is it true that you are single now?
Let me ask you a question. Did they put any picture of my wedding in the paper or did anybody tell anybody that they attended my wedding?

Are you saying you were not married to Emeka Nzeribe?
I didn't say that either. When people write something and they are so definite about it, one tends to wonder is it not the same way they have been hearing other gist that they've been hearing this one too? But they heard that 'oh marriage scattered' meaning that there was a marriage. So my question is, were they able to prove that there was a marriage in the first place. I'm not denying that there was a marriage. Of course I was married. But what's their proof that I was married in the first place if not for hearsay. Is it not the same hearsay that would still tell you 'oh her marriage has broken up'. Who was there when they saw divorce paper or separation paper? Nobody was there. I can boldly tell you that nobody asked me if I was married when I got married. They just heard and printed and that was it. Yes I was married to Emeka Nzeribe. So the marriage part happened.

But that wouldn't be fair to you or the public.
Truly, but my relationship with the public is the work that I do. It's not what happens in my bedroom. I'm not like the others and that's the truth. I prefer it that way. People should learn to leave my private life alone. They should focus on my work. Anything that has to do with my life outside of my work that makes me a celebrity, I don't discuss it. I no dey talk anyhow.