SIASIA'S TEAMMATES GIVE HIM PASS MARK 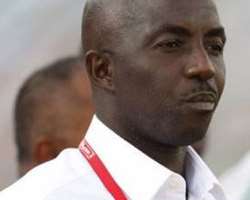 During an informal chat on a launch table, Victor Ikpeba, Ben Iroha, Peter Rufai, and others around almost chorused same remarks of great signals for a new dawn.

Siasia agreed but remarked that he needed many friendly matches to build and assess the players.

'What we saw in the match against Sierra Leone was good,' Ikpeba said of the play of Joel Obi,

Around also were Mutiu Adepoju, Alloy Agu, Uche Okechukwu, Edema Fuludu, Austin Popo, Jay Jay Okocha, and Austin Eguavoen. 'They have shown that the future could be bright if the right things are done,' Okocha said.

Lagos fans cheered them when they were leading 2-0 and when Sierra Leone pulled one back they booed them.

That has been the tradition in Lagos for years. Siasia, in his days as a player,  faced the same challenge in Lagos.

'It makes players put in their best,' Sylvanus Okpala argued while not defending the booing.

But what was important to Siasia and other technocrats was assessing the new players. And for a team that trained only once and still put up a good show for about 70 minutes showed what stuff they could be harnessed into with time.

'That match wasn't bad. We will build on it. We'll be fine,' Siasia assured, adding ' But I need many matches and I hope I get them.'

He will have further chance of assessing the players during the Obama Cup that starts this weekend in US.

During the burial of Okafor, Eguavoen who spoke on behalf of the players, extolled the virtues of their fallen colleague and said there was no way 'Uche could have taken his life.'

He continued: 'Uche was a nice guy, a wonderful team player. We shared rooms a couple of times and he was somebody anybody could vouch for. If he wasn't a nice guy all of us would not have been here today. This is a further testimony of the type of person he was. Uche never committed suicide and we are happy that the police have cleared that. It is our prayer that the truth is known and that God takes care of who killed Uche. May his soul rest in peace.'

The players had played a commemorative match against Imo All Stars during the lying-in-state at the Dan Ayiam Stadium to honour their fallen colleague. Thereafter they proceeded to Ubomiri where he was committed to mother earth. They were the pall bearers throughout.